Both parties were all about the costumes. 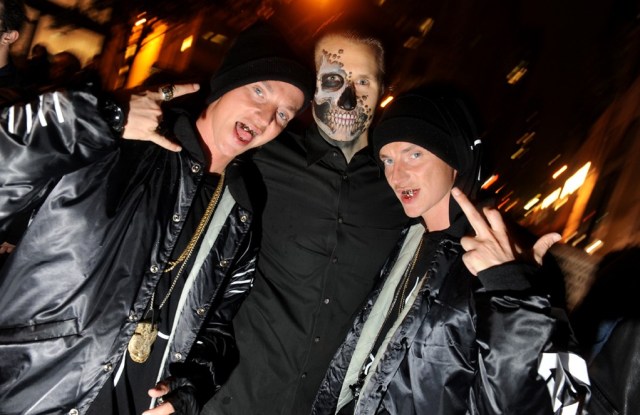 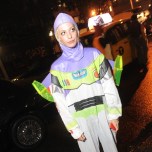 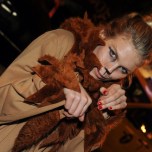 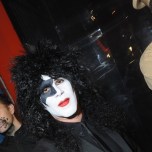 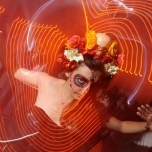 So it goes, imitation is the sincerest form of flattery. By 11:30 p.m. Thursday, no less than a handful of bespectacled, flannel-clad, thumbs-up festering Terry Richardson doppelgängers packed into Garage’s foggy warehouse in Manhattan’s Chelsea neighborhood. The real-deal photog, a cohost for The Smile-helmed Halloween bash, was noticeably absent among the sea of faux Mileys, Karls and assorted ghouls who filled the space, shimmying to throw-back hip-hop and noshing from taco trucks flanking the room.

Outside, fellow cohosts Scott Lipps, in full Kiss regalia, and a faux-face-tatted Scott Campbell picked up the slack by receiving arriving guests.

“It’s Sephora — don’t tell anyone,” the tattoo artist said of his face ink for the evening. Campbell noted that wife Lake Bell was off on location filming a movie, leaving him alone to welcome guests, who included a masked Chelsea Leyland and Cory Kennedy in a Buzz Lightyear onesie.

The ATL Twins, aka Sidney and Thurman Sewell, arrived wearing no costumes to speak of, still looking party-ready in their everyday uniform of baggy outerwear, chain necklaces and shiny gold grills.

To prove his point, Sidney pulled up Instagram, scrolling through page after page of costumes bearing likeness to their “Spring Breakers” characters.

“Hold up — that chick on the right looks pretty hot,” Thurman said, spotting a female dressed as a spring breaker.

“It says she’s from Toronto,” Sidney noted in agreement. “Toronto has the most hot, ratchet girls.”

Moments later, a pair dressed as James Franco’s “Alien” character and a ski-masked coed appeared, as if on cue. The twins gamely posed for some iPhone pictures.

A few blocks south, at the Top of The Standard, costar Vanessa Hudgens ditched her neon bikini in favor of vampire garb for V Magazine’s annual Halloween bash.

“I have like 10 million costumes this year,” the actress said. “It’s ridiculous.” As the petite vamp adjusted her fangs, boyfriend Austin Butler explained the costume’s origins.

“I stumbled across a Gothic store in the East Village,” the “Carrie Diaries” actor said. “It was right next to the costume store I was supposed to go to. So, we’re vampires.”

Lindsey Wixson went the chic route as a Forties actress, in a vintage gown and fur shrug, declaring Pippi Longstocking her favorite childhood costume as she maneuvered toward the door. Moving to Phoenix’s “1901,” Genevieve Jones hit the significantly less crowded rooftop bar dressed as a “bruja witch.”

“My favorite costume was the Marc Jacobs-Richard Prince nurse,” she said. “I wore the Louis Vuitton nurse outfit. I got Christy Turlington’s, and it had ‘Christy’ written on the back. It was perfect.”

“I just saw Jesus make out with a zombie,” yelled one reveler. “I love Halloween.”