Among the guests was Carlos Souza, who had spent the day as an art tourist, taking in the Matisse exhibit that just opened at the Legion of Honor museum.

By Diane Dorrans Saeks on May 2, 2014
View Slideshow 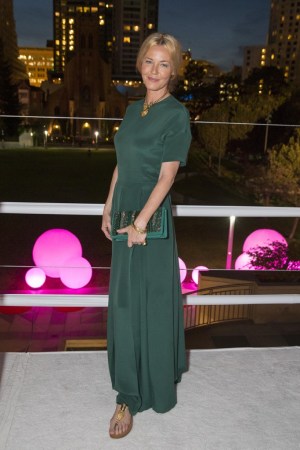 Necessity was the mother of invention Wednesday night at the San Francisco Museum of Modern Art’s biennial Mod Ball. The museum is closed for two years for a massive expansion so the splashy party, which attracted 2,000 people, was thrown instead among the fountains of Yerba Buena Gardens. Held in a tent high above the gardens, the Valentino-sponsored dinner was set against a surreal evening cityscape and drew Marissa Mayer and Zachary Bogue, Gavin and Jennifer Newsom, Jaimie King, Connie Nielsen, Vanessa Getty, Kate Harbin, Katie and Todd Traina, and Doris and Lexie Fisher.

Also among the guests was Carlos Souza, who had spent the day as an art tourist, taking in the Matisse exhibit that just opened at the Legion of Honor museum.

“While I was there looking at a Matisse portrait, I received an Instagram from Giancarlo Giammetti showing Valentino standing in front of a Matisse cut-out at the Tate Modern,” said Souza. ‘So we were all totally on the same art wavelength. I loved it.”

After his museum trip, Souza headed to lunch at Cotogna, where he discovered that the pastry chef had designed desserts inspired by Valentino designs. “She sent out three different desserts — like jewels — the culinary arts in homage to Valentino. It was delicious and glamorous,” Souza added. The gala concluded with performances by the bands Holy Ghost! and Passion Pit.