Valentino and The Society of MSK Host Fall Party 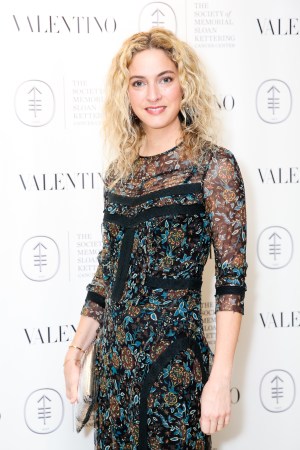 The Society of Memorial Sloan Kettering’s annual Fall Party at the Four Seasons Restaurant in Manhattan on Wednesday night was all about connections — personal, professional and figurative. First, the event, hosted by Valentino, could be one of the last galas held at the venue before it shutters in 2016 and is replaced by a restaurant run by the trio behind Parm, Carbone and Dirty French — Mario Carbone, Jeff Zalaznick and Rich Torrisi. Not everyone in Wednesday night’s crowd — which also included Nicky Hilton, Tabitha Simmons and Patricia Lansing — was looking forward to the change.

“It’s devastating; there have been so many good nights here,” said Veronica Beard. “One year [for this event] the dance floor was mirrored, and all of sudden everyone realized that you could see up everyone’s dresses. We had all had a bit to drink, and it was hilarious.”

The Society of MSK president Lavinia Branca Snyder agreed. “I remember being here some years ago for a birthday, and some of the ladies were dancing on the tables. I think this is the reason why the Four Seasons is such an iconic place in New York,” she said. “Every kind of party has taken place here, every important conversation. Many important relationships have either begun or ended here.”

“I’m really sad; I have so many fun memories here,” said Jill Kargman. “When it’s your birthday, they bring you the huge cotton candy with a weird raisin in it so it looks like Miss Piggy’s a–hole. I love it.” Still, she seemed hopeful for the future. “I happen to love Carbone, it’s across from my office, so this could work out. As long as they don’t f–k with those chains,” she said, gesturing to the linked window treatments. “Because I can’t think of anything more beautiful.”

Then there was the tie to the hospital itself. The evening was to raise money for the Pediatric Pain and Palliative Care Team, a new initiative at MSK focusing on children with cancer. “I literally owe them my life,” Kargman said. “I had melanoma that had spread, and they said if I hadn’t found it I would have been dead by my 40th birthday and I’m now 41.”

Eleanor Ylvisaker, chairman of the Associate’s Committee, told the touching story of a friend’s three-year-old daughter who was treated there, over a dinner of burrata and short ribs.