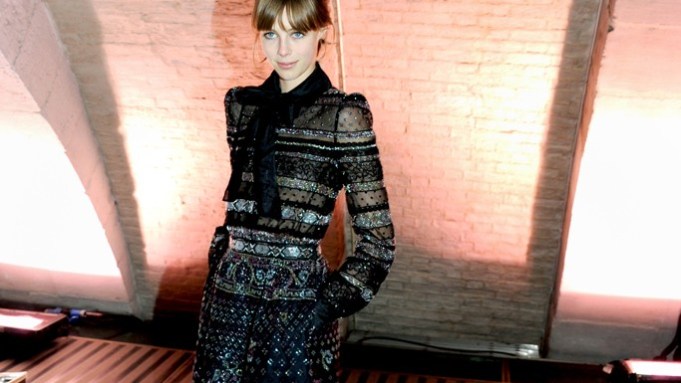 LONDON — The weather might have been frosty, but inside London’s Italian Embassy, the atmosphere was as warm as the Roman springtime as Valentino Garavani celebrated the opening of his retrospective at Somerset House Wednesday.

They dined on truffle risotto and fish upstairs, and later descended the grand staircase for dessert — a long table piled high with flowers, bowls of colored macaroons, pots of chocolate and other sweets. In the adjoining room, Jaz Hudson played the bongo drums alongside DJ Sam Young.

“I don’t go out very much — I’m not social — so when I do go out, it’s always for something or someone very special,” said Beckham, who was dressed in a red suit of her own design. “Valentino has been a real friend to David and myself, he’s entertained us in his houses, and he’s just a wonderful man, an inspiration.”

“I don’t have a closet stuffed with Valentino — sadly,” said a wistful Von Teese, who had rushed to dinner following a reception to mark the launch of her lingerie line in the U.K. “But I do have a beautiful red dress of his from the Eighties.”

Marie-Chantal, whose wedding dress features in the new show “Valentino: Master of Couture” at Somerset House, said she’d wanted Valentino to design her gown ever since she was a teenager. “You really trust him,” she said. “And his clothes are timeless — Olympia is wearing the same dress I wore when I was 18,” she said pointing to a little black number on her tall, blonde daughter.

Earlier that evening, guests had seen the more than 130 Valentino Couture creations spanning five decades in the show, which will run until March 3.

“The show isn’t about fashion at all — it’s about beauty,” said Hicks. “He’s an artist — his work transcends time.”