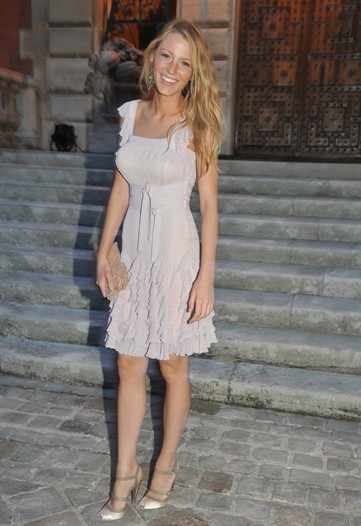 PARIS – “It’s nicer than my barn,” sighed Elizabeth Hurley Wednesday night after touring the new Valentino Garavani Archives, housed in one of the more humble – yet still impressive – outbuildings of the retired couturier’s sprawling Wideville estate. “Now I must go look at the gardens.”

“One has to take time to smell the roses,” agreed Claire Danes, in a flutter of couture ruffles, referring to one of Wideville’s many marvels: an estimated one million blooms nestled amidst sculptured topiaries.

“I want to see the house more than anything,” Marc Jacobs said lustily about the eight-bedroom, Louis XIII-style chateau, which was lit up in fuchsia as guests wound their way through verdant lawns, over the moat and towards a clear tent set up for a buffet supper and, later, dance party, with none other than DJ Jesus – as in model and off-and-on Madonna squeeze Jesus Luz – spinning twisted electro.

In a spectacular sendoff to Paris couture week, Garavani and Giancarlo Giammetti hosted a few hundred bold-faced names, from social powerhouses like Bethy Lagardere, Susan Gutfreund, Lee Radziwill and Georgina Brandolini to young starlets like Jessica Alba and Leighton Meester, all agog at the setting.

“I’m getting the fairytale Paris experience,” said Lively, in a short, ruffled Dior dress. “I would like to plunk a cottage in the garden.”

As Gwyneth Paltrow entertained the kiddies, Giammetti rushed to embrace Jane Fonda, who exclaimed that she couldn’t wear some of her treasured Valentinos anymore “because I’m too strong,” she said, doing a mock bicep flex.

Fonda said she just wrapped a Stéphane Robelin-directed French-language film opposite Daniel Brühl and is heading back to the U.S. to start filming Bruce Beresford’s “Peace, Love & Misunderstanding.”

As the dance floor filled up and the buffet tables were spread with tiramisu, Garavani, trailed by a butler, wandered around cradling one of his precious pugs.