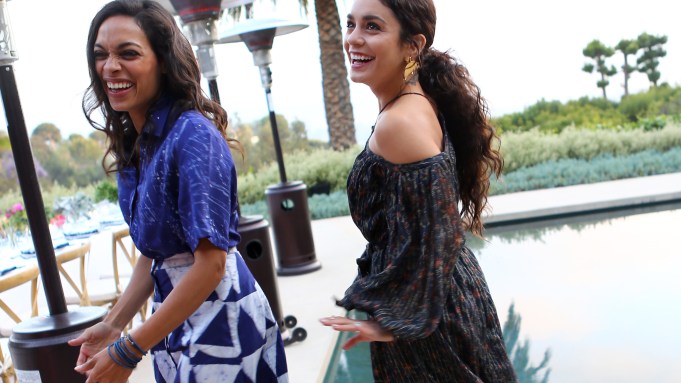 Superheroes are flying into movie theaters this summer but not before descending on the conversations at the cocktail party for Yoox and Rosario Dawson’s Studio 189 fashion label on Wednesday night.

Along with Studio 189 cofounder Abrima Erwiah, Dawson is a fan of the blockbusters featuring Marvel characters that fly, zap, spin webs and do anything out of this world. While Dawson’s favorites are Spider-Man and Claire Temple, the nurse she portrays on Netflix’s “Daredevil,” Erwiah is partial to Iron Man and Black Widow. “We get our superhero on,” Dawson confessed. “That’s, like, our delicious treat.”

The duo, who met growing up in New York, come across as Wonder Twins who use style to benefit artisan communities in Africa. After launching their first collection three years ago out of headquarters in Ghana and the U.S., they’re introducing denim cutoffs patched with indigo squares, white shirtdresses and pink batik halter dresses as part of a 13-piece collection premiering Monday on Yoox.

Dawson certainly showed some preternatural skills with multitasking. On Tuesday, she supported Sen. Bernie Sanders in get-out-the-vote campaigns at four colleges in East Los Angeles. Then she squeezed in her fashion party at a modern cream-and-white manse in Beverly Hills. On Thursday, she flies to Georgia to film the leading role in a farcical drama titled “Krystal,” directed by William H. Macy and costarring Kathy Bates.

It’s no wonder that Vanessa Hudgens, who plays “a normal girl trying to find herself in a world of superheroes” in an upcoming NBC comedy called “Powerless,” holds her “Gimme Shelter” costar in awe.

“She was, of course, one of those women who could do something like this,” Hudgens said of Studio 189. “She’s empowering. I want to be Rosario Dawson when I grow up.”

That’s not to say Dawson is all business. To electrified African beats mixed by DJ Uproot Andy, she hugged, danced and goofed off with guests including Shiva Rose, Kendrick Sampson and Tracie Thoms when not nibbling on spicy carrot and peanut tostadas and polenta topped with spring vegetables and mint. During dessert at the poolside dinner, she rallied Hudgens to join her in a ditty with Jesse Boykins III and Xeryus Gittens. Then everyone chimed in to sing “Happy Birthday” to their hostess, who turned 37 on Monday.

Emily Ratajkowski must have been gathering ideas for the 25th birthday blowout she’s planning for herself in June. A month after her birthday, she’s heading to London to film her fifth movie, a psychological thriller called “In Darkness,” with Natalie Dormer. Shedding the scantily clad roles she cornered in the “Blurred Lines” music video and “Entourage” movie, she said her dream roles are based on “strong female characters that don’t heavily revolve around the male plot line.”

That’s familiar territory to Josh Hutcherson, who met his match in the heroic huntress portrayed by Jennifer Lawrence in “The Hunger Games” franchise. Having spent 15 years of his life on Hollywood sets, the 23-year-old actor feels that now is the right time for him to make his directorial debut. Partnering with Indigenous Media and The Black List, he plans to helm a short film called “Ape” in one weekend. Most likely it’s a weekend that he won’t be campaigning for Sanders. Fond of the blue shirt he was sporting from Studio 189, he thought of a way for him and Dawson to spruce up the septuagenarian politician. “Make him a suit or a tie,” he said. “That’d be great.”