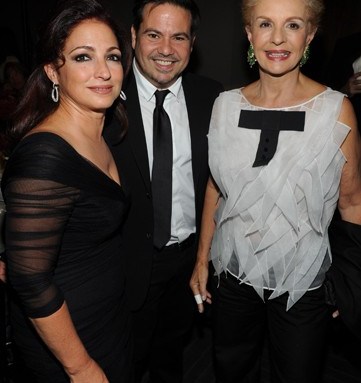 At the Trump SoHo hotel — in what was perhaps the first and only time they would all appear together on an event tip sheet — Gloria Estefan, Hugh Dancy, Carolina Herrera and Daisy Fuentes celebrated the 50th anniversary of Spanish-language magazine Vanidades. Dancy, arguably the biggest outlier of the bunch, arrived on the arm of girlfriend Claire Danes, who was there to support her friend and evening honoree, Narciso Rodriguez.

Estefan, Herrera and Oscar de la Renta were also recognized at the dinner, during a ceremony led by Fuentes.

While Herrera and Rodriguez kept their acceptances to little more than a “gracias,” and de la Renta had a brief note read in his absence, Estefan took full advantage of the limelight. She began politely, acknowledging her fellow guests of honor for providing her with red-carpet outfits over the years, but turned raunchy when thanking her husband, Emilio, who she described as “my first and only boyfriend.

“Yes, he got the only virgin left in the Seventies,” she told the crowd, which paused awkwardly before erupting in laughter.