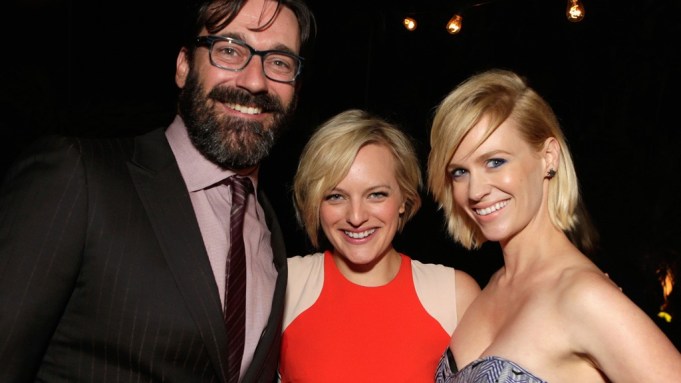 ALL FOR THE ‘MEN’: Vanity Fair and Maybelline New York toasted “Mad Men” Friday night in Chateau Marmont’s Bungalow One, which was given a Sixties flair with roaming cigarette girls passing out makeup instead of cigarettes. Elisabeth Moss happily snapped up a pink lipstick. But it wasn’t all retro as the cast, including Jon Hamm, Teyonah Parris, January Jones, Kiernan Shipka, Linda Cardellini, Rich Sommer and Jessica Paré, downed Coronas and Dos Equis, not martinis and whiskey, and boogied to “Blurred Lines.” Parris did her best to sashay in a tight Hervé Léger gown and Ruthie Davis heels. “They’re high. I’m in pain,” she said, kicking up her feet. In a celebratory mood, Paré gushed that there was plenty of good work on the small screen to honor at this year’s Emmys. “Honestly, there’s so much good television on right now. I read a quote the other day where Ron Howard said that television is the new literature, and I’m kind of down with that,” she said. Besides “Mad Men,” one TV show in particular was on Jones’ mind. “My favorite show is ‘Duck Dynasty.’ I love that show. Too bad they are all married,” she lamented.