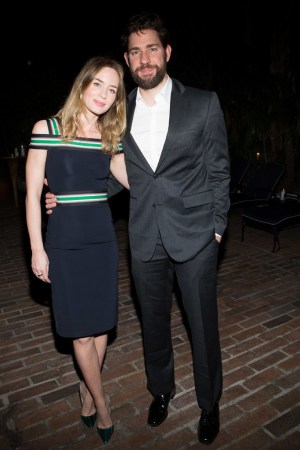 While Hollywood savors the glamour and glory of Oscar week, it’s savvy enough to realize that it’s sometimes best to temper such extravagant partying with a touch of social consciousness. That’s why Vanity Fair and Barneys New York’s cocktail party in Los Angeles Wednesday night was to benefit Oxfam.

“It’s just good to do something that feels more a part of the real world than the world that I live in,” said Rooney Mara, who has been an ambassador for the international antipoverty organization for a number of years. At the Chateau Marmont’s Bungalow 1, everyone around Mara — Suki Waterhouse, Patricia Arquette, Brit Marling, Kristin Davis, Mark Lee and Graydon Carter — were feeling similarly charitable.

“I came here more as a student wanting to learn,” said Elizabeth Olsen, who became reflective thinking about a small charity she discovered while on vacation in Nicaragua. “If you are open to talking to new people and strangers, [they] will lead you to something that you wouldn’t have found on your own. Now I’ve become more interested in what capacity I could help. It’s hard as the everyday man,” said the star of the upcoming “Avengers: Age of Ultron.” “You can go and give money, but what can you do beyond that?” Indeed. Emily Blunt said she’d like to explore camps in the Congo set up for victims of human trafficking, but admitted she’s not been on any major trips since becoming a parent last year. “We’ve been to Santa Barbara,” she said. “Yeah, this is a big trip,” said husband John Krasinski of their night out. The musician and famous vegan Moby, of all people, had tough words for the denizens of La La Land as they enter the homestretch of the awards season.

“I really do think one of the only worthwhile uses of public-figure status is drawing attention to important organizations and causes and not just being self-aggrandizing. We are at ground zero of self-aggrandizing, but it’s sort of a waste of time. When public figures are just concerned with self-promotion it makes them miserable,” he said. “If people are going to pay attention to you, you might as well say something and not just try and promote your perfume. We live in a celebrity-obsessed culture, so why not use that to draw attention to good things? I guess I’m stating the obvious.” Hear that Oscar nominees?