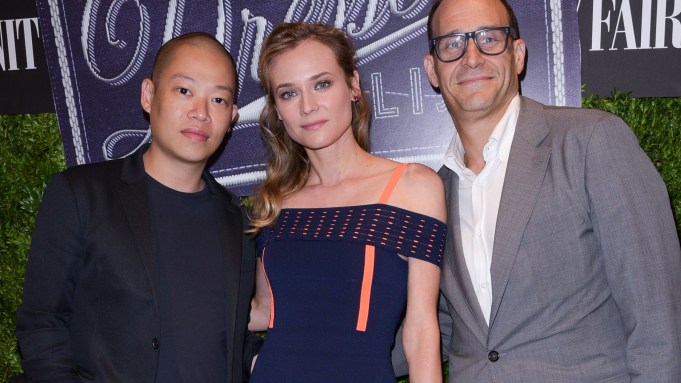 “I was on holiday and they sent me an e-mail,” said repeat honoree Anh Duong on Wednesday evening from the fourth floor of Saks Fifth Avenue. The artist was one of the 2016 selections for Vanity Fair’s annual Best Dressed list who were being toasted with a cocktail party at the retailer’s flagship. First-timers and alums alike mingled about, musing on how their daily attire earned them the recognition.

“This is the second time I’ve been on the list — the first was right before Eleanor Lambert passed away,” Duong continued. “I always paid attention to the list, because I love fashion.” As for her estimation of how she ended up on the list? “I don’t feel like I have a style — I just dress how I dress. I wear whatever I’m in the mood for,” she said.  “I have close relationships with many designers. I’m not a good shopper — I don’t like to go into stores,” she added — a statement that no doubt didn’t endear her to the owners of the store she was standing in.

Leona Lewis clearly absorbed the trendiness of dogs at NYFW, and posed with a fluffy pooch, before the animal broke free and scurried about the fourth floor. Diane Kruger arrived on the arm of Jason Wu, while the likes of Monica Lewinsky, Chimamanda Adichie, Victor Cruz, Olivia Chantecaille and Georgina Chapman — as well as the occasional Real Housewife, for contrast’s sake — milled about between racks of Narciso Rodriguez and Marc Jacobs.

Cruz, also on the list, arrived in a Todd Snyder suit and listed many fellow athletes among his personal best-dressed list. “I think Rihanna has amazing style, Ronnie Five, Tom Brady, LeBron James…I think of Beyoncé, I think of Justine Skye, all these different people. But those people are really doing it right.”

Those who truly have an effortless time looking Vanity Fair-ready proved at a loss for how to describe such a distinction.  “I really think being well-dressed doesn’t come from the garments you pick; it’s really how you feel within yourself,” Chapman offered for her rules for style (which probably include wearing lots of the Marchesa line she designs). She’d stopped by the party dressed for the Magic Bus gala with her mother in tow, whom she cited as a style inspiration. “My mom’s always been an incredible dresser…Mummy can’t hear me,” she said, before turning to her mother. “I’m giving you a compliment!”