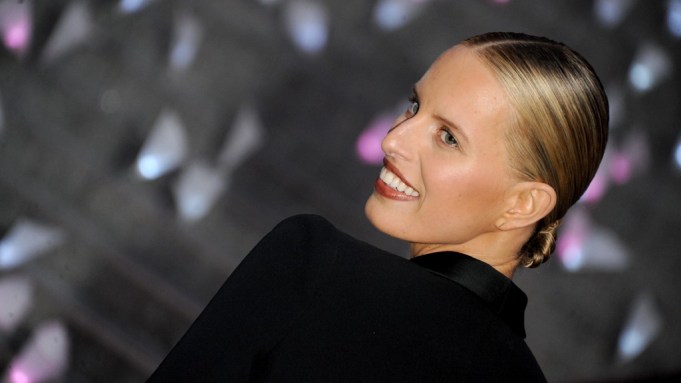 The Tribeca Film Festival was born in 2002 in the wake of, and in ways as a response to, 9/11. And so Vanity Fair’s annual kickoff party for the festival went on as planned on Tuesday on the portico of the New York State Supreme Court on Centre Street, where the flags above flew at half mast in deference to the bombing at the Boston Marathon the day before.

“It started in the aftermath of 9/11 and there’s always been an awareness of the security needs for these types of events,” said New York City Police Commissioner Ray Kelly of the festival. “It’s important to get on with what we do with our lives as opposed to being forced to change significantly. The Tribeca Film Festival is a manifestation of that — people coming to many events and participating.”

Guests did exactly that. Festival cofounder Robert De Niro received select guests at the top of the building’s foreboding stairway, while Christopher Walken and Christine Baranski caught up nearby. Near the south bar, Baz Luhrmann was preparing for the promotional onslaught for his “Great Gatsby” remake. He had to be at Tiffany’s at 8:30 a.m. to unveil their movie-themed windows, he said. Gretchen Mol smoked a cigarette nestled in a love seat alongside decorative throw pillows embroidered with quotes about New York. (“A city like this makes one dream tall and feel in on things,” read one ascribed to Toni Morrison.) Gay Talese brandished his shirt board notes. Whoopi Goldberg and Zac Posen cut an odd conversational pair. Fran Lebowitz and Kelly cut an odder one, chatting a few steps away from Graydon Carter.

Salman Rushdie, a regular at the party and the film premiere circuit in general, had a new perspective on the business of filmmaking this year. The adaptation of his book “Midnight’s Children,” for which he wrote the screenplay, is due to open later this month and he’d been on his own promotional tour. Interviews with the film press tend to be shorter than literary ones, he said. As for the Boston attack, Rushdie offered some hard-earned wisdom.

“I think we have to just proceed — proceed as normal,” the author said. “Those of us, like me, who grew up in England in the Seventies and Eighties at the time of the IRA campaign…this used to happen. A couple of times a year, there’d be a bomb in a shopping mall. It happened. One of the things I always commended the British for is that they never let it put them off their game. They would just proceed. I think in this city above all, we know that. What you do is get on with it. I think the people of Boston seem to be reacting like that as well. That’s the best thing to do: ‘Screw you, we’re going to just get on with it.’”