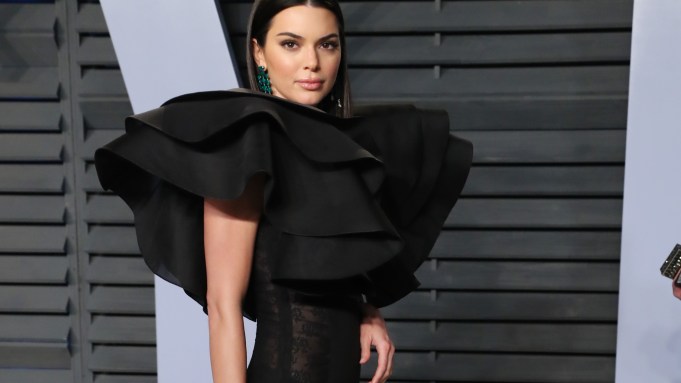 The 2018 Vanity Fair post-Oscar party remained the celebrity draw it always is, even with a changing of the guard. In fact, some younger guests didn’t even realize the magazine has a new editor in chief. By the time reporters made it to the party after the Academy Awards ceremony and Governor’s Ball ended, the more intimate viewing party hosted by Radhika Jones had broken up and the cavernous custom-built space in Beverly Hills turned into a full-blown rager, with Jones somewhat hidden in the mix but A-listers bumping into one another every few steps.

There was Mary J. Blige chatting with Drake while two bodyguards stood nearby. Jude Law and “The Crown” star Matt Smith were in deep conversation, and Emily Blunt was having a tête-à-tête with CAA’s Kevin Huvane.

Kendall Jenner stuck close to Derek Blasberg, sort of trying to dance to the thumping music but mostly just looking lost. Glen Powell was one young actor not afraid to talk to her, though he had to push back the giant organza sleeve of her mini dress to do so.

“What did you think of all the dresses?” asked Sarah Silverman. “I liked Lupita’s.”

Most of those who were at the ceremony changed for the party: Margot Robbie, who leaned up against the bar with Jared Leto, had changed out of her white gown by Chanel – which that day had just named her one of its brand ambassadors; Greta Gerwig donned a black leather moto jacket to match her newly restyled punk hairdo, and Best Supporting Actress winner Allison Janney, in a white shirt and red skirt, posed for a photo with “The Greatest Showman” actor Sam Humphrey before plopping down on a couch by the entrance next to Octavia Spencer.

There is no VIP section at the party, because the whole point is everyone there is a VIP. Though many of the old guard names were absent, Quincy Jones still made it out, as did Danny Huston.

“This is tight,” — as in “cool” — said Sean Combs as he walked in and surveyed the scene. He and his date soon found themselves within range of Kate Beckinsale, probably a coincidence, but captured on film nonetheless. This is how many photos supposedly heralding “hot new couples” originate — because a party was crowded.

Timothée Chalamet stuck close to his family and Armie Hammer, genuinely enjoying the evening as well-wishers came up to greet him.

“Did you see Saoirse?” asked Elizabeth Saltzman, who was busy dancing a few feet away from the star. “We cut her train off for the party.” Indeed, the pale pink Calvin Klein train was missing and the new hem showed off Ronan’s ankles.

The five designers who attended were of the younger guard. Diane von Furstenberg, Carolina Herrera, Vera Wang, Tom Ford and other perennials of the Graydon Carter era were missing this year.

Zac Posen brought Maya Hawke — a dead ringer for her mother Uma Thurman — as his date. She was wearing his forest green ballgown. “It’s her very first Vanity Fair party,” he explained, as she did a mini curtsy.

Alexander Wang, in his signature black T-shirt and pants — forget the “formal attire” dress code — bounced around until his date Zoë Kravitz found him in the crowd. “Ready to go,” she said.

Around the stroke of midnight, most of the under-30 set seemed to be ready to migrate to “JT’s or Guy’s” as in Justin Timberlake’s or Guy Oseary’s after-after parties.

At the valet, the same gaggle of sheer-dress-clad models who were taking selfies in the garden were gathered under the heat lamps. “It’s like a really long line of cars to get to Guy’s because they only let up a few at a time,” explained one to Lily Aldridge. “I’m gonna be, like, walking to Guy’s.”

Back inside, those who weren’t up for leaving buckets of fried chicken bites, a disco tent and comfortable couches stayed until 2:30 a.m.

Who knew where Adam Levine of Maroon 5 was headed, but his chauffeured SUV almost left without him. “Adam Levine? Adam Levine!” shouted a valet. “Here!” he shouted back, nearly getting in the path of another car as he rushed to get in. “Stop…please,” he said as he hopped off the sidewalk.