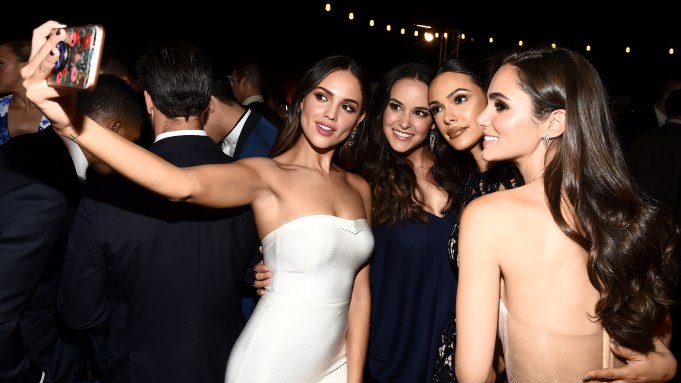 “I’m kind of starstruck because I’m in proximity,” said actor Ismael Cruz Cordova of Rita Moreno. The two, along with other fixtures in the Latino acting community, arrived at The London West Hollywood Wednesday night to honor Moreno with the Variety Latino Legacy Award.

On his fellow Puerto Rican’s contributions, Cordova said, “A lot of the doors that I’ve perhaps walked through blindly would not have been there had she not been breaking down walls, exploding onto the scene and always keeping in her mouth the name of our people and in her heart our country.”

When it came to the importance of representing cultures, Cordova was not alone in his sentiments. The night’s other honorees, Richard Cabral, Melissa Fumero, Anabelle Acosta, Jorge Granier, Alicia Sanz, Eiza González, Eric Ochoa, Carlos PenaVega and Allen Maldonado all took a moment to reflect.

“To be in this industry and to be honored is good for my family and it’s good for my Cuban culture,” Acosta said before talking about her latest project, “Lost & Found En Cuba.” “It’s about a girl who ends up going back to Cuba and she finds her roots. I read the script and thought, ‘It’s just so close to me and my family.’ I haven’t been back to Cuba since my parents came to this country.”

Nearby, González, who will be appearing alongside Lily James, Jamie Foxx and Kevin Spacey in the upcoming action film “Baby Driver,” spoke of balancing talent and sex appeal, saying, “To me, to be a Latina in Hollywood means that I have a lot of work to do. I really want to show the world that you can be equally beautiful, talented and feminine. You don’t have to oppress your sexuality.”

Sanz also appreciated her culture, noting, “I’m from Spain. I have an accent and I think that’s sexy.”

Maldonado was on hand to rep his friend’s clothing line as well as his African-American and Puerto Rican heritage. The “Survivor’s Remorse” writer and actor mentioned it was a “dream” saying, “As an actor, you just wake up and want to work. For your work to be acknowledged and to be chosen as one of 10 of the many Latino actors that are out there is an incredible honor.”