Variety honored five women for their professional and philanthropic achievements. 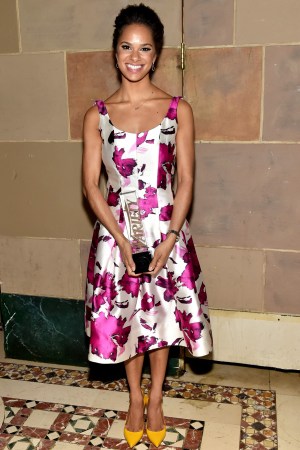 “I have a real understanding for what I represent.”

Last summer, Misty Copeland was promoted to principal dancer at American Ballet Theatre, the first African-American dancer to earn that top ranking in the company’s history. “I’m just so happy there are little girls that can look at me and see themselves,” she said on Friday afternoon. The dancer had swapped her leotard for Oscar de la Renta to take the stage at Variety’s Power of Women luncheon at Cipriani 42nd Street. Copeland was being recognized along with Lupita Nyong’o, Julianne Moore, Vera Wang, Megyn Kelly and Mariska Hargitay for their individual professional and philanthropic achievements.

Yes, Friday’s honorees have a collectively impressive list of accolades but what exactly defines a “powerful woman”?

“I think a powerful woman is one who doesn’t apologize for her femininity,” Nyong’o told WWD. “And a powerful woman stands up for what she believes.” Wang added her thoughts to the designation. “Courage to live life the way you want to, courage to pursue what you really love — and courage to be yourself.”

Host Billy Eichner was certainly taking advantage of the stage to be — and promote — himself. The comedian also opened the lunch with a shout-out of support for Democratic presidential nominee Hillary Clinton and knocked Donald Trump.

Kelly told the crowd, “I’ve been thinking a lot lately about love and support, how critical they are to happiness, including my own this year. In the wake of the dust-up between yours truly and Donald Trump — has anyone here heard of that? — some have used the word ‘fearless’ about me. And it’s wrong. I am not fearless,” she continued. “Fear is normal. The goal is not to get rid of it, the goal is to walk through it. Courage is what we need.”

Moore, speaking out for Everytown for Gun Safety, closed the lunch with a song lyric. “As Teddy Pendergrass sang, ‘The world won’t get no better if we just let it be, the world won’t get no better, we gotta change it, yeah, you and me.” Before the lunch, Moore had also shared her concept of power. “I think power is taking advantage of your voice, being able to use it and being free with it,” she said. “And using it to support things you believe in.”

The women at Friday’s lunch did exactly that.