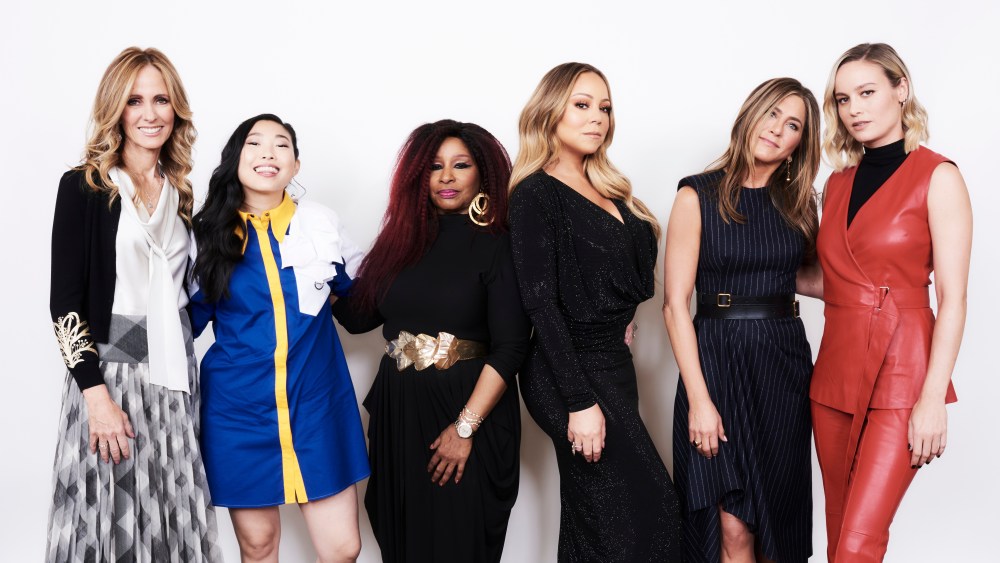 This year for its Power of Women event in Los Angeles, Variety — in partnership with Lifetime, Audi and Moroccanoil — honored Jennifer Aniston, Awkwafina, Mariah Carey, Chaka Khan, Brie Larson and Dana Walden. Each of the six appeared on a cover of an upcoming issue, which celebrates Hollywood’s most philanthropic women.

“Giving back is part of everything, it’s a cycle,” said Awkwafina inside the Beverly Wilshire Four Seasons before the luncheon on Friday. The Internet became familiar with the rapper and actress, born Nora Lum, after her 2012 YouTube video “My Vag” went vital. That audience widened when she made her acting breakthrough in “Ocean’s 8,” “Crazy Rich Asians” and “The Farewell.” “There’s not a universe where I wouldn’t in my position. Everything that I do is going to set the stage for another generation. I give back to these kids, with the nonprofit that I work with, because I want there to be more. There needs to be more.”

That organization is Building Beats, which helps give children access to the technology needed to make music of their own.

“I now propose a quote from Nora’s ‘My Vag,’” said Natasha Lyonne, when she took the stage to introduce Awkwafina. “’My vag bounce like J.Lo’s booty. Your vag like James Lipton’s booty.’ Ah, the kids today. They love the phrase BDE, which if you didn’t know, now you know, stands for big d—k energy. Well, I am profoundly proud to have Nora usher us into this new era of BVE.”

The audience roared with laughter. “Also, obviously I love her because our voices sound the same, which makes her instantly trustworthy,” added Lyonne with her raspy voice.

“Me and Natasha really sound alike,” said Awkwafina when it was her turn to take the microphone. “It’s very confusing when we’re on set. No one knows who’s talking.” The two worked together when Lyonne directed the first episode of Comedy Central’s upcoming “Awkwafina Is Nora From Queens,” created by Awkwafina.

“Is this going to go?” continued Awkwafina. The teleprompters had suddenly stopped working. “It says no signal. This is so awkward. OK, all right, no one’s on it…do you know how already nerve-racking this is for me?”

“I can do a little bit of tech support if you want me to get down there,” she added playfully as a someone took the stage to attempt to fix the issue. “Is it a PC or a Mac? Should I wing it? I don’t think I should wing it.”

The audience applauded in support as Awkwafina was handed her phone, where her speech was written. “I’m ready now. Forget all that happened.”

Ellen Degeneres was next to come out, dancing her way to the podium: “I was going to dance until they fixed it, but now they’re not doing anything…I see nothing. I’m fine. Jen is freaking out back there.”

That would be Jennifer Aniston, who was honored for her work with St. Jude Children’s Research Hospital. “OK, that was incredible,” said Aniston. “I can’t tell you how much easier this all just got. Thank you, Awkwafina, for taking that painful bullet for all of us. Thank god, I wrote my speech down.”

“Hi, I would like to give you an update on the mental health of the teleprompter team,” joked Murphy. “It’s bad.”

Murphy shared that Walden, who devotes her time to UCLA Jonsson Comprehensive Cancer Center, was the first to take “a chance on [him] when no one else would. She was head of Fox Studios at the time and over dinner, I told Dana what I wanted to do with my career and my life, which is take people marginalized by this industry, gay people, minorities, women and make them the center of my stories.”

He got emotional as he told a personal story he said he had yet to share with the public. Three years ago, his son Ford, he said, went for a checkup but “something was not right.” You could hear a pin drop, as the audience listened.

“My baby had a tumor the size of a tennis ball at 18 months [old],” he continued. Walden, whose mother battled cancer, is the godmother to both his children. “…The first person I called was Dana. She instantly charged into action, as she does, and thanks to her…we were at Children’s Hospital. She organized the whole thing.…I’m not emotionally recovered to be honest, but Ford has. I’m so proud to say he’s cancer-free.”

When Walden accepted her award, she said: “I knew for certain that Ryan was the exact right person to introduce me. He’s also the exact wrong person to follow up on stage. I wish that you could do the acceptance part, too.”

Natalie Portman was in attendance to present Larson with her recognition. The two met when they became part of the Time’s Up movement.

“We were a handful of actresses in a room sharing stories, and I was immediately struck by her all-encompassing warmth, her unique way of seeing the world and her brave and razor-sharp intellect,” said Portman.

“That is my sister,” said Larson, who works with Equal Justice Initiative and used her platform to introduce Eva Ansley, operations director for the organization. “Like she said, we met among many, other incredible, powerful women at a time when our industry realized it desperately needed reform and accountability. It was a painful and emotional time, but it was a time that I remember as pure sisterhood.”

Seven-year-old “Mixed-ish” actress Mykal-Michelle Harris stood on a box to give an adorable speech before presenting Mariah Carey with her award.

“Oh my god…I mean, future president Mykal-Michelle Harris,” said Carey. “Before I get into this, I just want to say this prompter thing, I predicted it.…This is why I have cue cards.”

The technical issue had been fixed at this point, though that didn’t matter to Carey. “I actually don’t need prompters for this one,” said the star.

“I was a wayward child with the weight of the world that I held deep inside,” she continued, reciting the lyrics of “Close My Eyes” off 1997’s “Butterfly.” “Life was a winding road, and I learned many things little ones shouldn’t know, but I closed my eyes, steadied my feet on the ground, raised my head to the sky, and the times rolled by. Still, I feel like that child as I look at the moon. Maybe I grew up a little too soon’. Good afternoon powerful women!”