Julie Bowen has a fan moment of her own over Alfie Allen of "Game of Thrones." 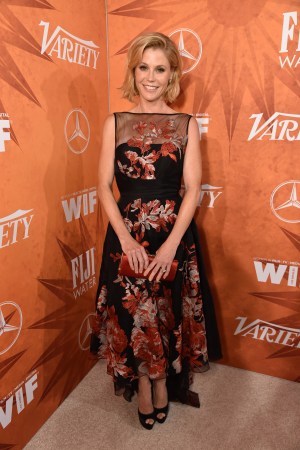 “This is always a fun event,” said “American Horror Story” star Sarah Paulson, who is nominated for best actress. “There you are,” exclaimed Amanda Peet as she made her way through the throng to hug Paulson. “She’s a really old friend,” said Paulson. The two met on The WB show “Jack and Jill” in 1999. Outside on the tree-filled patio, Bowen wasn’t doing a very good job of playing hostess. “Oh my god, I’m freaking out right now. Do you watch ‘Game of Thrones?’ I geek out over that show, and Theon is sitting over there,” she said, cocking her head toward actor Alfie Allen, who seemed preoccupied with his iPhone. “Let’s go say ‘hi,'” suggested her friend. “I can’t. I don’t know if I can handle meeting him. What if I find out he’s, like, normal? It might ruin the show for me. His character got his penis cut off and fed to him in one episode,” said Bowen.

Nearby, Angie Harmon was having a more tame conversation, lamenting the upcoming wrap of her series “Rizzoli & Isles.” “I’m not ready for it to end,” she told a group of friends. “We’ve been at it since February, but I could keep going.”

Niecy Nash certainly planned to keep the party going. “My husband and I will have our own private party later,” she purred.