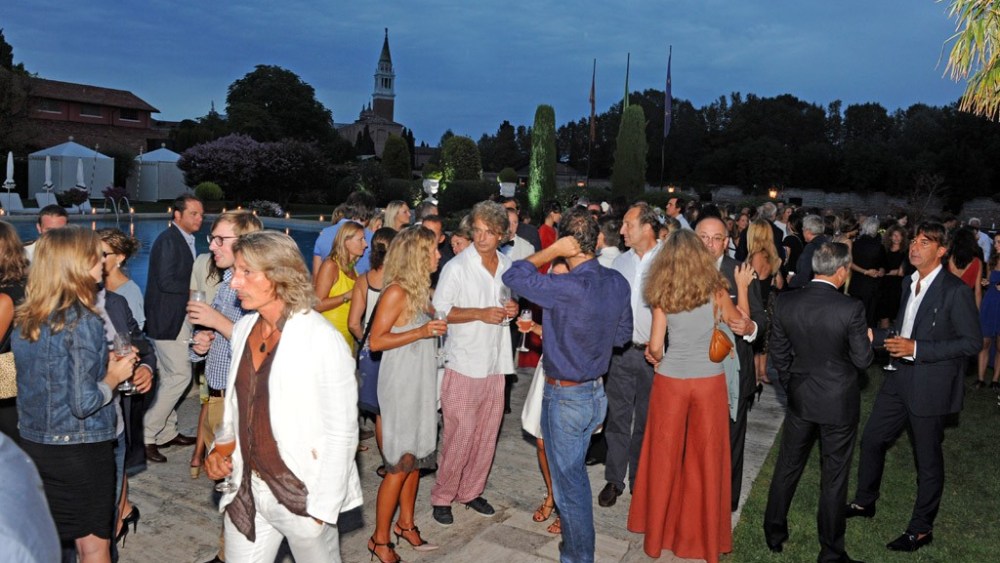 A turquoise swimming pool lit with candles, lush gardens and a view of an old clock tower set the scene for Valentino and W magazine’s party Thursday night at the Hotel Cipriani to mark the 69th edition of the Venice Film Festival and the launch of a new eyewear collection designed by Maria Grazia Chiuri and Pierpaolo Piccioli.

While eyewear was the reason, the city itself was the focus for Florence Welch, who was making her first-ever visit to Venice.

“I’m bowled over by its beauty,” she said with a smile. “It’s like coming to heaven.”

Kasia Smutniak talked more about her golden yellow Valentino dress. “I feel comfortable,” she said. “The designers make dresses that are elegant but that you can just as easily wear with flat shoes — I like the attitude.

“And I like the pockets,” she said, gesturing toward her own.

For Chiuri and Piccioli, the film festival was the ideal place to launch the new eyewear since they often look for inspiration to Italian cinema from the Sixties — the heyday of voluptuous beauties such as Silvana Mangano and Monica Vitti. “We love cinema, and we love interesting women, be they divas from the past or modern women such as Kasia,” said Chiuri.

The Venice limited-edition eyewear line, manufactured by Marchon, features rounded, tinted lenses inside apple green, fuchsia or powder frames adorned with Swarovski Elements, signaling a departure from the studs that have become a fixture on Valentino accessories the past few seasons.

Architect David Chipperfield, director of the 13th annual Architecture Exhibition at the Venice Biennale museum and a frequent Valentino collaborator, said he appreciated the challenge of developing a fashion brand’s new identity through store design. “It was a very difficult project in some ways, but I have enjoyed working with [Chiuri and Piccioli] and finding what Valentino should look like now,” he said. “We’ve become good friends with a commitment to a good discussion.”

Earlier in the day, Miu Miu presented its “Women’s Tales,” a collection of four short films by four international female directors as part of the festival. “It’s fantastic. I’m so lucky to be in the presence of three other women directors here,” gushed Zoe Cassevetes, who directed the fashion-focused “The Powder Room.” “We’re having so much fun together.”

Massy Tadjedin, whose film “It’s Getting Late” was shown for the first time, described it as focused on “the anticipation” women experience when getting ready to go out. “It’s my first time at the Venice festival, and it’s so inspirational,” she said.

Lucrecia Martel’s dark, surreal “Muta” and Giada Colagrande’s “The Woman Dress” rounded out Miu Miu’s selection of films. Colagrande — whose husband, Willem Dafoe, was spotted in the audience — attended the showing with her protagonist, actress Maya Sansa. Miuccia Prada posed gamely with the four directors and actress before entering the theater.