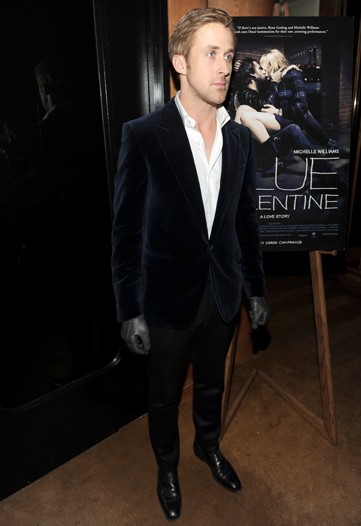 A dream deferred leads to some unfortunate sartorial decisions for Michelle Williams and Ryan Gosling’s characters in “Blue Valentine.” Gosling sports a Terry Richardson-esque mustache, about 20 pounds of weight gain and an even-heavier resentment in the antiromantic comedy, which premiered Tuesday at the Metropolitan Museum of Art. Director Derek Cianfrance said he had his stars cohabit in a small house in upstate New York with Faith Wladyka, the child actress who plays their daughter, in order to perfect the levels of familiarity and spite required by the roles.

“What did I learn about Ryan? I never knew how incredibly musical he was,” mused Williams, looking gamine in a pixie cut and Azzaro frock. “He’s a virtuoso on the piano, and it took my breath away.”

The film’s NC-17 rating was a favorite subject of conversation throughout the evening. Gosling called it “misogynistic.” Others involved in the project simply deemed it “unfortunate.” Wladyka’s parents laughed about having to escort their underage starlet out of festival showings during the “older” scenes. The topic was moot by Wednesday afternoon when the Motion Picture Association of America downgraded the movie to an R rating after the Weinstein Co. protested.

“Did Vera Wang just walk out?” one partygoer wondered, as a small commotion occurred near the doors of the theater. “Did she leave in disgust?”

Apparently not, as Wang joined Rachel Roy, Erin Fetherston and nondesigner revelers at the Top of The Standard hotel for a Stoli-soaked after party. Harley Viera-Newton manned the DJ booth near a shimmying Paz de la Huerta, who seemed hell-bent on a wardrobe malfunction. Kelsey Grammer, meanwhile, showed off a new lease on life, sporting jeans, a white T-shirt and a new fiancée, Kayte Walsh.

“This is like a scene out of ‘Gossip Girl,’ ” one partygoer noted. “Chace Crawford is by the bar with Michelle Trachtenberg, they’re both ignoring Blake Lively and she’s now getting handsy with Ryan Gosling in a booth.”

Sure enough, the actors shared a window seat for about an hour before being interrupted by Harvey Weinstein, who nudged Gosling toward a nearby reporter and took his seat to cozy up to Lively.

“The bathrooms are so scary,” Lively crowed later, while waiting for the elevator. “The view. Like…so scary. I had to hold my friend’s hand.”

Before heading for a waiting car around 1 a.m., Lively paused in the hotel lobby to watch a male companion spin around in the revolving door of the entrance, whirring faster and faster by her as she laughed and clapped her hands in delight.