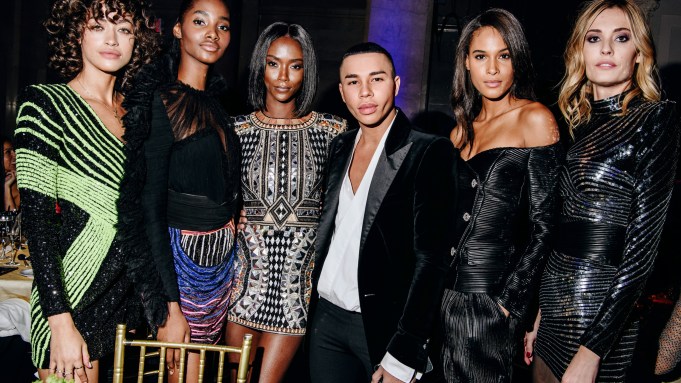 Instead of the regular red-carpet rigamarole of an awards gala, where celebrities rule the crowd, Thursday’s “Night of Stars” magnified the winners, and their respective convictions.

Pretty much all of the honorees had something non-fashion to say. There were mentions of getting out the vote, immigration, politics, civil discussion, sustainability, inclusivity, longevity, technology and cause-related marketing. All in all, there was a lot to consider. But as emcee Simon Doonan reminded guests at the Fashion Group International, isn’t that the point?

There was also plenty of thanks to go around with many honorees thanking fellow designers by name. Vera Wang, the Superstar winner, who doubled up with Calvin Klein and Donna Karan as her co-presenters, spent more time praising them, Fashion Star winners Anna Sui and Olivier Rousteing (calling for a round of applause with each) than she did speaking about herself. Wang also had kudos for FGI and the group’s president and chief executive officer Margaret Hayes, who missed this year’s gala due to health reasons. Recently reminded how she had won a New Designer award from FGI in 1999, Wang said, “Tonight, my fashion life has come full circle. I cannot think of a more extraordinary honor from a more extraordinary institution.”

With a friendship dating back to Wang’s pre-designer days at Vogue, Klein said he first caught sight of her in an office sandwiched between Vogue editors Baron Gunzburg and Polly Mellen. “For that alone, she deserves an award.” Klein praised Wang for “upholding the values of advocating for women throughout her career, while encouraging and inspiring. She is one of the most gifted and hardest working designers and businesswomen I know other than Donna, of course,” as Karan nodded approvingly.

He was more minimalist when asked earlier if he had any thoughts about how his namesake company is changing. Klein said briskly, “No, none. Or anyone else’s company — they’re just all the same.”

Like the Klein-Karan-Wang connection, Sui and her presenter Marc Jacobs, go way back to his days helping shoppers at the now long-shuttered Upper West Side boutique Charivari. Jacobs said, “What Anna truly is more than anything is a great fashion designer and creator who is reimagining, reinventing the past, who is always current and contemporary and never lacking in the style of the world that Anna has created.”

To that end, “her ability to devour, edit and retain details is truly encyclopedic,” Jacobs said. “Every essence, every spirit, every fabric, every color — she remembers everything — from Arts and Crafts to Americana, from Art Nouveau to Art Deco, from Renaissance to Victoriana, hippies, punks, Mods, surfers, schoolgirls, dollyhead, androgyny, from glam to glitter and grunge, Anna never ceases to thrill and delight with the fantasy she consistently delivers.”

The daughter of immigrants, Sui spoke of how her parents urged her to stay true to her designer dream. She noted how the only motive behind her first five-piece collection in 1981 was “to sell to cool rock ‘n’ roll boutiques and to dress rock stars,” she said. “Little did I know that 37 years later, I’d still be doing what I love.”

Surrounded onstage by a phalanx of models, Rousteing, a nine-year veteran at Balmain, also spoke of his roots. “I come from the south of France. I don’t know my parents. I come from an orphanage,” he said. “When you don’t know where you come from, one strength is to know where you want to go. This is my strength from the beginning at Balmain. I created the Balmain Army because they are soldiers, they are fighting against boundaries, pushing the limits of fashion. This is what I love about fashion.”

Humanitarian award winner Barbara Bradley Baekgaard of Vera Bradley spoke of her always-marching spirit, owning up to her “ready-aim-fire” nickname. The company’s foundation has raised more than $32 million for breast cancer research alone, but its philanthropy extends to other areas. Heartfelt in her thanks, she described the FGI honor as “the nicest-ever tribute I’ve received in my whole life.”

The Neiman Marcus Group’s Jim Gold let slip that Corporate Leadership winner Deirdre Quinn’s Lafayette 148 is a $200 million-plus brand. The label is also one of Neiman Marcus’ four top-selling, ready-to-wear brands. “I’m sure half of you in this room are trying to figure out who the other three are. I’ll give you a hint with Chanel, so you only have to figure out two. As many of you know, the ready-to-wear business is a b—h. To privately build a high-end, ready-to-wear business to this scale and sustain its popularity for two decades is incredible and only a handful of people have managed to do it.”

Referring to her 20-year-strong, zero-waste ways, he said, “In essence, she’s been doing sustainability longer than Trump’s been the greatest human being on the planet.”

Cornejo said, “The planet is very important and I’ve always wanted to be sustainable. I tried to do it little by little, being quiet in my own way. It’s been a long journey. But at the same time, it’s been rewarding to be creative with less and to create things that are desirable to women of all sizes, and to embrace women and make them feel good about themselves.”

She said good night with, “Please, go out and vote guys on Nov. 6 — whatever you do.”

In a it-takes-a-village moment, Fashion Star winners Carol Lim and Humberto Leon called up their team, including his mother Wendy to join them on the stage. “For two kids who grew up in the suburbs to feel like they can be on a stage like this among this crowd with Vera, Anna [Sui], Olivier Rousteing — people we have idolized that are continuing to be part of the fashion dialogue is really amazing, and it feels like an honor to be here,” said Lim before adding Kenzo, LVMH, the Opening Ceremony team and Jacobs to that list.

As this year’s Oracle honoree, model, scientist and nutritionist Maye Musk was described by her stylist Julia Perry as an “It Girl,” more than 50 years after her first test shoot. In conversation during dinner, Perry said  they met in Canada when Musk moved there as a single mother with three teenage children living in rent-controlled housing. That trio — Tosca, Elon and Kimbal Musk — have each since achieved stratospheric success. In those leaner days, her daughter had the wherewithal to suggest they get an extra-ply carpet since sleeping on the floor would be required until the paychecks started rolling in, Musk noted proudly.

Later graciously accepting her honor, Musk told the crowd that as a scientist, “We just don’t understand the way you put things together. But we appreciate your art, your craft and the beauty that you share with everyone.”

Angela Missoni and her mother Rosita turned up in the audience at the gala. In the city for the opening of artist Cheryl Donegan’s three-month installation at the Missoni store, Rosita Missoni said she is always game to be part of the New York state of mind. “All the world is here. You find also lots of Italians in the streets. It’s the big metropolis of the world with all of civilization here. It’s a must to come to New York, even for me at my tender age of 87.”

Design Technology Star Billie Whitehouse of Wearable X, welcomed her mother Leanne, the founder of the Whitehouse Institute of Design in Australia, who had flown in for the Cipriani Wall Street gala. The elder Whitehouse was recognized by FGI Australia in 2011 for her Lifetime Commitment to the industry. Billie Whitehouse encouraged the crowd to check out her own company’s wearables and to offer their feedback. Beauty winner Frédéric Malle also singled out his family, and Architecture winners Robin Standefer and Stephen Alesch, Roman and Williams founders, spoke of being part of the fashion industry’s extended family. Another Star was Moncler for Luxury Lifestyle.