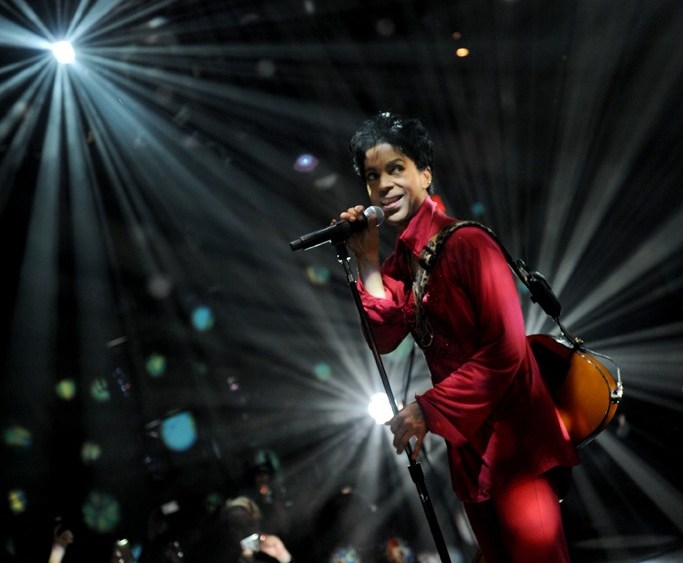 A few hours before she was due to perform at the Versace for H&M fashion-show-cum-dance-party at Pier 57 in Manhattan on Tuesday night, Nicki Minaj came to the end of a long press line ready to talk bargains.

“My fans, a lot of them are young, they don’t even know how lucky they are to be able to get a piece of Versace for an affordable price,” the 28-year-old rapper said in her nose-pinched Queens accent. “Like, where was this when I was in high school? Because let me tell you…”

Donatella Versace styled Minaj in the diffusion line for the event, an over-the-top celebration of the house’s collaboration with the Swedish fast-fashion giant. Minaj wore a dress and tights that both bore the same riotous color prints and studs. Her very large hair, the work of another stylist altogether, was a blonde perm tinted-green to match the palm-frond accents that sprung from it.

“It doesn’t look cheap; it looks rich,” Minaj continued of the wares. “I can’t wait to change into my performing outfit, because it looks more like the around-the-way girl, but just, like, in Versace.”

“It’s the only thing they sent me, so I didn’t really have a choice,” he explained with a laugh. “I just came from the airport, so it was either this or a T-shirt….It’s kind of the spirit of Versace: excessive in a good way.”

Eventually, the crowd got a look at the whole line in a runway show (but only after Prince, the evening’s top-billed entertainment, found his seat). It may have set a record pace for 43 looks. The models — mini Donatellas in extra-long, flat-ironed extensions and black leather bandanas — descended on the maze of a runway like speeding bullets coming from all directions. When it was all over, and Versace had taken her bow, she beckoned the crowd into a large back room that had been outfitted as an Eighties-era Miami nightclub. The models and VIPs sat in booths on two raised sections in back. Minaj took the stage in her second look with four dancers in tow and rap/sang through a manic set of hits.

“After this next performer is done, you’ll have to fight me to the line back to buy these clothes, OK? I’m charging everything,” she said before ceding the stage to an exuberant Prince. He played for nearly an hour, handling almost every instrument onstage and habitually name-checking “Donatella.”

After the performer’s final encore of “Purple Rain” finally closed, a voice came over the public address system to advise the crowd that they could shop the looks at an on-site pop-up store.

A line formed immediately. It was a little before 12:15 a.m.

Click Here for the Full Versace for H&M Collection >>