Versace Shows Off Versus With a Bang

Angel Haze, Dead Sara and Grimes perfomed at the debut of the J.W. Anderson-helmed capsule collection.

By Jessica Iredale and Taylor Harris on May 16, 2013
View Slideshow 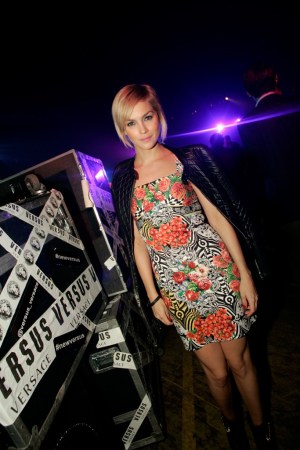 Soon, the music quieted and a once blacked-out wall lit up, revealing a mise-en-scène of rolling racks, makeup stations and Versace and Anderson acting out a preshow scramble. Versace sized up a model in a crop top and gave him the thumbs up before darting over to another. The rest of the lineup then filed out onto a wraparound catwalk, stomping around the room’s periphery.

RELATED CONTENT: Donatella Versace and J.W. Anderson for Versus >>

As promised during a preview, the capsule collection was shown in three groups: all black, colorful knits and black-and-white. By taking on Versus, Anderson tackled racier ground than he’s used to, yet proved a natural. He worked his banding motif on strategically placed straps, accessories and gimmicky add-ons — models came branded with tags reading “Versus” stuck on their necks and midriffs. Speaking of, the whole collection was designed for men and women who love their abs. Crop tops for him and her were aplenty. The women’s styles — with a sporty knit tank or an abbreviated patent pinafore top with Versace medallions — are more reality-based than the men’s, but the latter both provoked and amused per the house mandate.

After each runway round, a different performer took the stage. Rapper Angel Haze led, followed by L.A. rockers Dead Sara and finally Canadian electropop prodigy Grimes (a recent Versace fave, who may have been lip-synching). Though some in the crowd took to smoking openly in front of the stage, the more considerate retreated to a designated smoking area outside the building.

“We love you Gaga!” two outside-dwelling partygoers shouted between drags, prompting all others to spin around. Sure enough, Lady Gaga had been spotted making her way into the bash via a back entrance in a black swishy minidress, her blonde hair cascading down her back. A p.r. rep later confirmed Gaga had been at the party, spending the evening perched on a quiet mezzanine in full view. “That Gaga,” one savvy guest said, eyeing the mezzanine after the pop star had departed. “She’s tricky.”