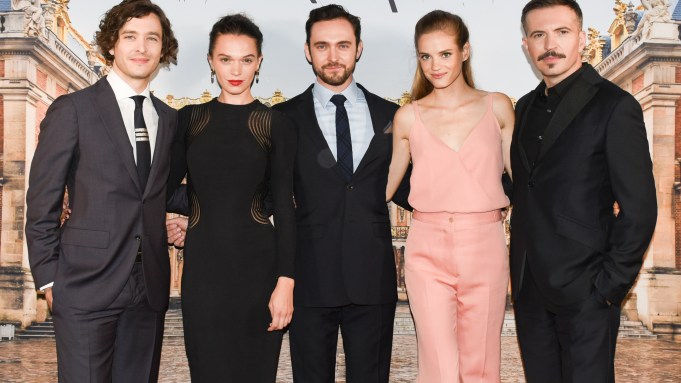 “Welcome to the opulence, the mystique, the passion,” said the host of “Versaille’s” Bagatelle dinner party last night. The celebration was the first of three leading up to the U.S. debut of “Versailles” this Saturday on Ovation TV. True to the host’s words, last night’s fete featured large floral arrangements, wigged waiters in costume, a performance by actress and singer Lisa Zane, a three-course meal curated by Chef Nicolas R. Frezal and an abundance of drink — wine, Champagne, Grand Marnier, you name it.

“I feel you, more importantly, deep inside of me,” the host said before introducing the show’s creators Simon Mirren and David Wolstencroft. The cast, Billy Zane, Malik Yoba and Helen Mirren, Simon’s aunt, were all in attendance and you can be sure that Helen was served “The Queen” jokes along with her meal. She even entertained them.

“America’s the last country to finally see [‘Versailles’],” Alexander Vlahos, who plays Philippe d’Orléans, said. “It’s been sold to 136 countries worldwide.” He doesn’t like to compare the show to others — “I want ‘Versailles’ to stand out on its own” — but he described it as: “‘Downton Abbey’ meets ‘Game of Thrones’ with all of the politics of ‘House of Cards’ thrown in. It’s the most expensive TV show the French have ever made.” The show’s budget was roughly $30 million.

“[‘Versailles’] is really clever because…it talks about the role of women back in the time, and the fact that it’s still the case now for a lot of women around the world to not be listened to, to not be taken seriously, to be interrupted,” said Noémie Schmidt, who plays Henriette, wife of d’Orléans and mistress of King Louis XIV. She and co-creator Mirren both remark that “Versailles” portrays how women used sex to empower themselves at that time.

“Louis’ mother had breast cancer and they literally cut her breasts off without any anesthetic,” Mirren said. “I really wanted to pay homage and respect to the women of those times because had those women been born today, they’d be the head of MI5 or they may be running for president of the United States of America. Who would Hillary Clinton have been in Louis’ court?”