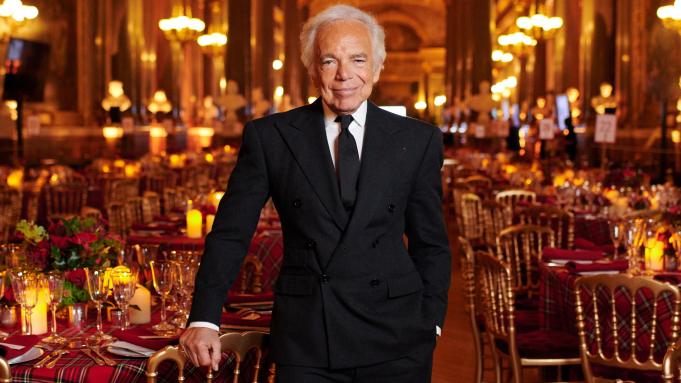 VERSAILLES, France — “I don’t know what the Sun King really feels like. If I knew, maybe I would follow the Sun King,” Ralph Lauren mused as he took in the Galerie des Batailles at the Château de Versailles, where tables dressed in tartan cloth awaited 750 guests attending a gala dinner in his honor on Tuesday night.

“Unbelievable,” he exclaimed, taking in the monumental military-themed paintings lining the 390-foot gallery. “I mean, it’s beyond comprehension because it’s so much art, so much beauty…it’s amazing to be honored here.”

Indeed, the French-American Foundation pulled out all the stops for the event celebrating the 50th anniversary of his brand. Fashion executives, politicians, business leaders, actors and cultural officials joined in a standing ovation for Lauren, whose relationship with France has deep roots.

“I think I was one of the first Americans to come to France,” he told WWD. “They’re very receptive. I think we have a nice communication.”

Lauren is even entertaining the prospect of holding his February ready-to-wear show in Paris instead of New York. “If they ask us to come back, we’ll do it here. I think that kind of crowd would be interesting,” he said. “If we do it, it will be very intimate and small. But we haven’t really figured out if we’re doing it, or [if] there’s a venue.”

In the meantime, the designer — flanked by his wife Ricky, daughter Dylan and son Andrew — enjoyed being king for a night. The evening kicked off with soprano Julie Fuchs singing the American and French national anthems. Catherine Pégard, president of the Château de Versailles, and Jamie McCourt, U.S. ambassador to France, delivered speeches.

Midway through the meal, Lauren sat down with his longtime friend Philippe Labro for a brief Q&A. “His story is like a novel,” the French author said. “You see, Ralph Lauren is the kind of American one dreams of: an artist-designer, an entrepreneur-manager, a conceptualist and a humanitarian and, lastly, the head of a dynasty. He is what you call a star.”

Among the guests watching the proceedings on rows of big screens was Alber Elbaz. “We’ve known each other for many years. I always respected him and love him, also as a person and a designer,” he said.

“I’m a fan of Ralph Lauren, of his elegance, that gentleman-farmer aesthetic. It’s easy to wear, yet very chic,” chimed in Alice Taglioni, pointing to her navy pinstriped jumpsuit. The French actress has four movies coming out next year, including “Claire Darling,” in which she plays a younger version of Catherine Deneuve’s lead character.

Jean Reno came with his wife, Zofia, who worked for Lauren for 15 years. It was his first time visiting Versailles after dark. “I had the Louvre to myself every night for three weeks with Tom Hanks. Here it’s not quite the same,” he said with a laugh, gesturing to the milling crowd.

“One is impressed by the grandeur, the beauty, things that would be impossible to build today, and also by the work. It’s not just being dazzled by a monarch,” the “Da Vinci Code” star said. “Thousands of hard-working people built this, and you can’t help thinking about that, especially at a time when the world is not well at all.”

Indeed, the evening’s splendor stood in stark contrast to the scenes of rioting that gripped Paris over the weekend, as antigovernment protests triggered by a fuel tax turned violent, with demonstrators torching cars and vandalizing monuments and stores.

The tense political climate prompted the French government to postpone a planned ceremony on Thursday at which President Emmanuel Macron was set to decorate Lauren as an Officer of the Legion of Honor — a promotion from his original title of Knight of the Legion of Honor, granted in 2010.

“I’m not in politics and I can commiserate with the issues on both sides,” Lauren said of the protests, which have snarled traffic across France.

“I love Paris. It’s very hard to get anywhere, so when you’re here for a day or two and all this happens, it’s unnerving, a little bit. I always see Paris in a very beautiful way. It’s a beautiful city and you feel the history, you feel the beauty and you feel people’s compassion for it,” he added.

The Legion of Honor ceremony will be rescheduled for next year, though as his son Andrew pointed out, Lauren needs little excuse to return.

“France is very special to him. I think he has a really big space for it in his heart. I think he loves coming here. Every time we know we’re coming, he gets excited, and with all the family, it feels like a second home. Everyone is always welcoming us very warmly here. It feels very comfortable,” the film producer said.

Glancing across the sea of tables, he took pause. “I assume they signed the Treaty of Versailles here, and the bathroom is very far away, but how could you not be overwhelmed and honored to be here?” he marveled.