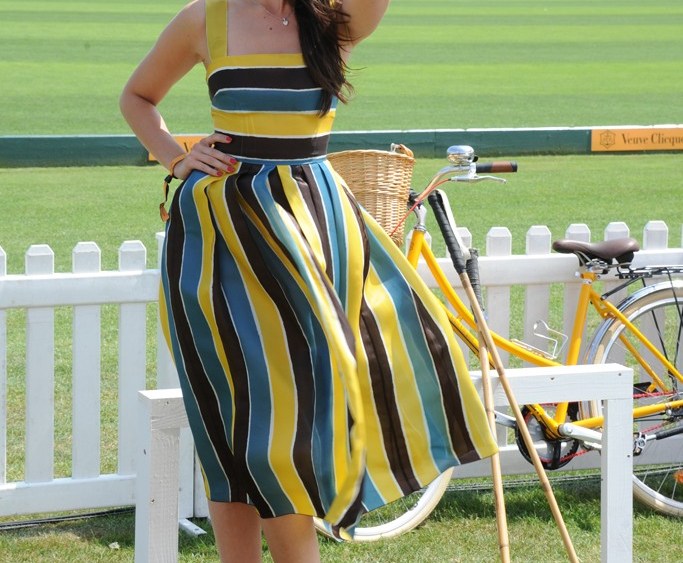 “I feel like I’m on a movie set, everything looks so perfect; when does England ever look this great?” asked Ben Hudson, the musician who records professionally as Mr Hudson, as he surveyed Cowdray Park, in West Sussex, England, at Veuve Clicquot’s Gold Cup polo match on Sunday.

“We both get really competitive,” said Campbell. “Sadly, we didn’t win this time.”

Lowe, decked out in Dolce & Gabbana and a pair of towering platforms by Charlotte Olympia in collaboration with Clicquot, had just returned from Latitude Festival in Suffolk, England. She watched Jessie Ware perform, and no, she didn’t have to sleep in a tent.

“We stayed in a friend’s house, four miles from the festival, so it was very respectable,” said Lowe.

Patrick Grant was one of the few guests on hand to steer clear of the bubbles. “I’m training for an Ironman contest in Scotland in September, so it’s a dry two months for me,” he said. “I mean, I could probably be sensible about it, but I’m more of an all-or-nothing guy.”

He had driven down with his girlfriend Katie Hillier, listening to cricket commentary in the car. “I do wish Australia would lift their game, it would be nice to see a bit of competition,” he said of England’s recent thrashing of its onetime colony before seeing Damien Martyn, a former Australian cricket player, in the crowd of guests. Martyn, for his part, remained tight-lipped on the subject.