Champagne, celebrities and sunshine. Oh yes, and some polo, too. 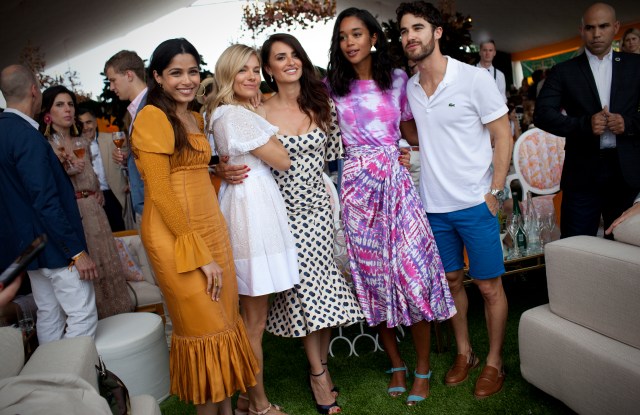 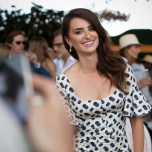 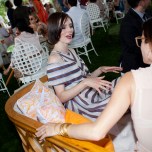 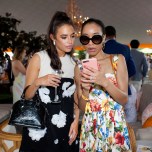 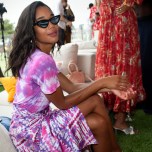 The Veuve Clicquot annual Polo Classic at Liberty State Park is for many the official kickoff of the summer social season, and, overpowering predicted rain showers, Saturday’s affair proved no different.

Having been ferried across the Hudson early in the sweltering afternoon, the preppiest among New York’s social crowd joined in alongside the usual celebrity attendees for the occasion.

“Riverdale” actor Casey Cott blotted himself with a paper towel between interviews, not far from where a publicist was liberally spraying a reporter in sunblock during the break in the action.

“Ooh, my first drip of boob sweat,” a woman in a crop top and flouncy skirt said to those around her, as she fixed her hair.

“Tequila shots to the face,” a seersuckered young man said buoyantly to his comrade upon their arrival. “You mean Champagne shots,” his friend countered him.

Yes, it was the drink of the afternoon, of course. After posing along the carpet, this year’s VIP crowd of Penelope Cruz, Sienna Miller, Sam Rockwell, Laura Harrier, Freida Pinto, Darren Criss, Winnie Harlow, Gayle King and more were ushered inside (where else?) the VIP tent for glasses of Champagne and shelter beneath chandeliers to mingle and take in the afternoon’s match.

Miller had chosen wisely in a “fresh Valentino” white eyelet dress, “made for a 12-year-old, not a 36-year-old,” she said. “I’m like Bo-peeping my way.”

Saturday was her first time at the American iteration of the Classic, though “I’ve been to polo event things in England. It’s such a part of the culture there,” she said. “Veuve Clicquot sponsored the ones in England, right? I’ve definitely drunk Veuve Clicquot at another polo event, which makes me sound like a total a–.”

The actress, who is “working on what work I’m going to do” at the moment, was feeling right at home at the affair. “I associate it with England; all the royals play polo,” she said. “It’s a very privileged sort of sport. But also really fun. I had a friend whose father was a polo player. That’s why I got to go. All the Argentine polo players were really handsome.”

For Coco Rocha and husband James Conran, it was their first public appearance since welcoming their second child, son Iver Eames Conran.

“I just had our little baby boy six weeks ago, so this is the first time that we are not with him and not feeding him, and that I’m not in my pajamas with spit up,” Rocha said. “I’m wearing a dress, it’s very nice. It’s actually going to be fun, I think. James and I, this is our first date night. Date day?”

The Polo Classic is a tradition for the new parents. “We come every year. A lot of our friends in the industry, they come here, so it’s kind of like a reunion, before everyone goes off to their summer vacation,” Rocha said. Their travel plans include their annual family trip to Saint-Tropez, along with some jobs for the model in Europe, where she will leave baby Iver at home for the first time.

“When it is a four day trip, we will bring everyone, and I love it. [Ioni, her three year old] is obsessed with traveling; you get jaded and you think everything is boring and frustrating but when you see them and they’re like ‘yes! We’re getting on a plane!’” Rocha said. “And the best part is when we go, and mommy and daddy pay for the ticket, she goes left thinking she’s going to first class and we’re like ‘no no no, economy girl.’”

As the afternoon progressed, man of the hour Nacho Figueras, who was both host and star player out on the polo field, would draw the VIP’s attention away from their flutes (momentarily, at least) and towards the field. His big plans for celebration when it was all said and done with?

“I go back to my house and I order a big hamburger and I do nothing and sit on the couch for two hours,” he said.

Of all the day’s attendees, we’d say he earned that moment fair and square.