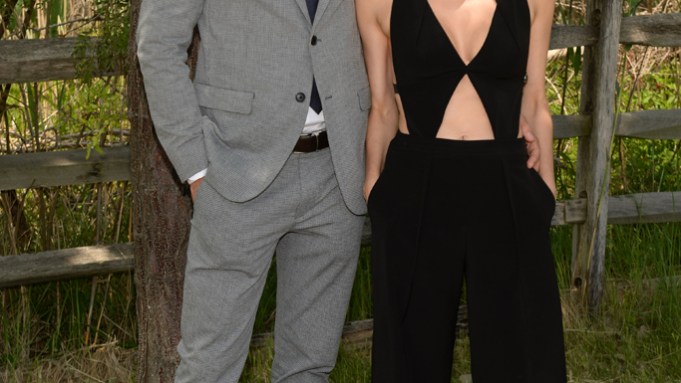 Saturday saw an ever-so-glamorous jaunt to Liberty State Park in New Jersey for the eighth annual Veuve Clicquot Polo Classic. While the occasional attendee knew the old polo rule, they were few and far between; the majority of Saturday’s crowd ventured across the Hudson for the combination of flowing Champagne and handsome men on horseback.

Joan Smalls, sporty in a white mesh Alexander Wang frock, was one of the polo newcomers, and was lured to the event by the “Champagne, a chance to soak up the sun, and celebrate the start of summer.” She wasn’t alone — a crowd including Mindy Kaling, Joshua Jackson and Diane Kruger, Leandra Medine and Andrew Rannells arranged themselves beneath Veuve-orange umbrellas to swap summer plans, sip endless bubbly and, yes, occasionally watch the match.

Emma Roberts had her eyes set on a summer of “weekend road trips with the girls” between shooting in New Orleans, “maybe checking out Savannah or Nashville — I’ve never been to either.” Freida Pinto, who ceremoniously threw out the ball toss to kick off the match, said she preferred a European affair: “ I love going to Italy in the summer.”

Kruger, in a vintage Roland Mouret all-in-one, stole the attention away from her equally well-dressed husband. She wasn’t keen on the polo itself. “I’m not a big horse fan, personally — I do not trust them. I grew up riding horses but I’ve been thrown off one too many times,” she said.

Maggie Gyllenhaal admitted she had limited equine experience. “I’ve ridden a horse, but I’m not great at it. My husband is actually riding a horse as we speak,” she said.

Playfully promoting his newest song was 50 Cent, who promised it will be “popping in every strip club soon enough,” as he teased with photographers along the red carpet.

The afternoon’s host and star, Argentine polo champion Nacho Figueras, posed for photos with his wife Delfina Blaquier, in a breezy Pucci gown and perfectly imperfect loose bun. “We kick off the summer with this event,” Figures said at the start of the day’s festivities. “I really have two summers; I’m now here, and I go to the Southern Hemisphere for their winter.” A grueling schedule, indeed.