The president of VF Corp.’s sportswear coalition last week served as the corporate host of the Heartworks gala. 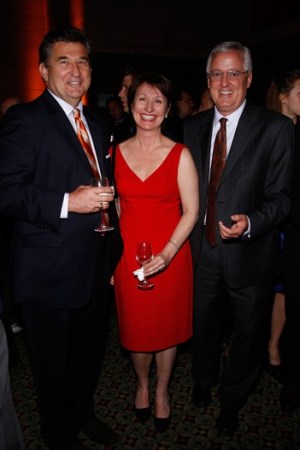 Karen Murray, the president of VF Corp.’s sportswear coalition, last week served as the corporate host of the Heartworks gala.

The annual event, which raises funds for the National Marfan Foundation, drew a large crowd to Cipriani to honor Michael Weamer of the American Heart Association and Randy Falco, formerly of AOL, as they received Hero with a Heart Awards.

Murray works hard to raise funds for the organization because her son, Michael, is afflicted with the connective tissue disorder. As hostess Hoda Kotb of NBC told the gathering: “People with Marfans can live to be 70, but they have to be diagnosed — and half the people don’t know they have it.”

The gala also drew NBC’s Brian Williams, Mayor Michael Bloomberg and entertainer Brian Stokes Mitchell. The group has been gaining ground in recent years, raising public awareness and research funds for battling the disease. And an upcoming documentary, “In My Hands,” is expected to further the cause.