Amar’e Stoudemire, Victor Cruz, DJ Cassidy and Damir Doma turned out for the occasion hosted by Swizz Beatz in Paris on Thursday. 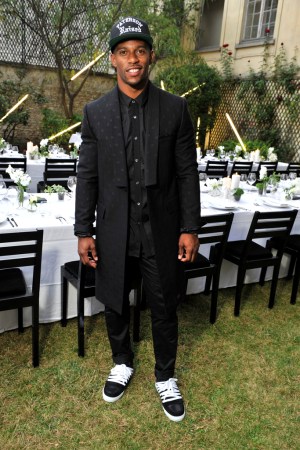 GENTLEMEN’S CLUB: “Right now, I’m just on such a high with Givenchy. I’m still there. I haven’t come down yet,” said Victor Cruz, fresh off the set of Givenchy’s latest campaign, which he fronts along with other celebrities, including Donatella Versace.

Recovering from an injury, the New York Giants wide receiver was in Paris on Thursday night to celebrate Farfetch’s new men’s Web site.

His next fashion endeavor, said Cruz, would be a creative role for “a New York-based brand off the beaten path.”

“I’m right in the trenches, just got our second samples back, will need to make some alterations, but it’s going well,” he smiled, without divulging further details.

Amar’e Stoudemire, who’s been involved with Los Angeles-based apparel brand Spiritual Gangster for the past three years, talked about how “the level of competition has risen off the court.”

“Guys are taking a more fashion-conscious approach – it’s good to see,” said the 6-foot-10 New York Knicks All-Star forward, suggesting that it was also somewhat of a necessity. “I can shop most of the stores because of the two-XL size I wear, so I can find sweaters and T-shirts. But there are designers that would do custom-made clothes from me – Rick Owens has done it before, Calvin Klein, Tom Ford,” he explained, accompanied by his stylist Rachel Johnson, whom he shares with Cruz.

“I think athletes have realized they have become a walking brand and because of that they have to represent themselves. The way that they dress and look is part of their aesthetic and the goals that they set for themselves,” offered Johnson, noting that in Cruz’s case it materialized in a high-profile ad campaign.

Damir Doma, who dresses LeBron James and Tyson Chandler, marveled at how the sports pros are “au courant” about a small European niche brand like his.

“I think what they appreciate is the slouchy aesthetic of my brand,” he reasoned, fresh off his first Milan show.

Hosting the evening at the Mona Bismarck American Center was Farfetch chief executive officer José Neves and multi-hyphenate Swizz Beatz, who had put together a “Best Dressed” list for the new men’s site, including Carmelo Anthony, Usher, DJ Cassidy and Ben Gorham in the lineup.

“I changed at the very last minute,” Beatz divulged about running late for dinner in a slim-fit Kris Van Assche suit and Tom Ford sneakers.

“My contribution to fashion is more behind the scenes, on projects which I never talked about,” he said humbly, citing Christian Louboutin as one. “The loudest things are really unspoken,” Beatz, who is also global creative director of Reebok, remarked.

Multiple fashion projects do not seem to distract him from his music.

“We are going to start off the new season of ‘Empire’ with a big bang,” Beatz promised for fall. “But the thing I’m most excited about is my wife’s new album, which is totally outrageous. We are still working on a date now, but Alicia Keys’ new album? It’s the craziest thing that’s gonna hit the ground and crack it open.”

DJ Cassidy, meanwhile, was getting ready to drop his third single called “Future’s Mind,” featuring Chromeo. “No one’s heard it yet. It will premiere on pitchfork.com this Monday night, June 30,” with a studio album to follow suit shortly, he said.

“If you are going to spend money, why go by something that was made for a generic fit,” he cited the new gentleman’s mantra, adding that for everything else, there was Farfetch. “It’s a never-ending shopping experience, a dangerous Web site really,” he argued.

Mikky Ekko, sporting a Dior shirt and Aganovich dungarees, said he was giving himself a budget, “and it’s not a six-figure number. What I look for is the highest return on investment,” the singer, who is getting ready to tour throughout fall, noted while reflecting on the new man’s attitude.

Gorham said his suit was by Bauer, “one of the last remaining bespoke tailors in Scandinavia.”

The entrepreneur, who opened his third Byredo store in New York three weeks ago, said he was eying London next and has a new jewelry line due to debut at Christmas.