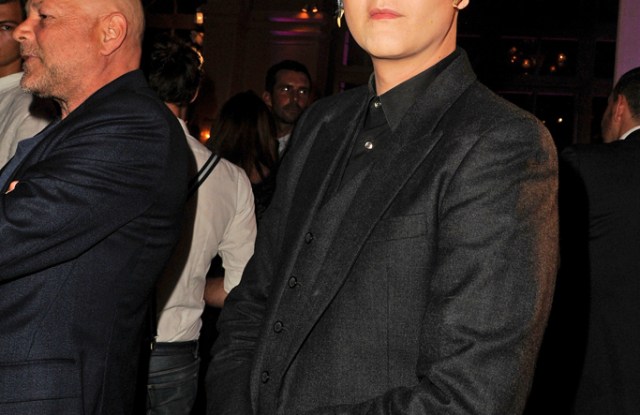 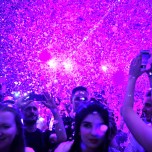 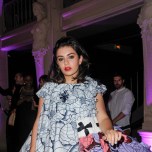 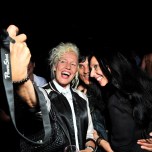 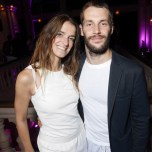 The stage was set with canons sprouting flowers and a maxi-version of Viktor & Rolf’s signature seal hung like a moon above as some 800 people piled into Paris’ Le Trianon theater Wednesday night to celebrate the 10-year anniversary of the brand’s first fragrance, Flowerbomb.

Hidden backstage was Charlotte Emma Aitchison, aka Charli XCX, supine on a couch due to the heft of her asymmetric couture dress by Dutch design duo Viktor Horsting and Rolf Snoeren. “You have to sit a certain way, that’s for sure,” she smiled.

The songstress is working on a new record. “It’s definitely going to be the most pop and the most electronic thing I’ve done,” she said. “I’m just touring for the rest of the year, as well.”

Back in the theater, once the crowd settled, the designers took to the mic.

“When we started working together, we had many dreams, many wishes. And one of them was to make an iconic fragrance,” Horsting said. “So to us, making Flowerbomb, together with L’Oréal, is a dream come true. We wished upon a star, and today Flowerbomb is entering her second decade.”

“Tonight we celebrate Flowerbomb’s birthday, but more importantly we celebrate loyalty,” continued Snoeren. “Just as our friendship is based on loyalty toward each other, in her 10 years Flowerbomb has attracted a big and very loyal group of friends. So when we were thinking about tonight’s celebration, we could think of only one person to come and sing for you.”

That someone was Tori Amos.

“It is exactly 10 years ago that she performed at one of our shows. We have seen countless concerts before that and ever since. We are still loyal to her because we love her,” Snoeren said. “Because she is unique, and because it seems that the longer she is in the business, the better she gets.”

During an interview Thursday morning, the designers said there’s no creative difference for them in conceiving a fragrance and a clothing line.

“It all comes from the same mind,” Snoeren said.

“Beauty was always an integral part of our view of fashion,” added Horsting.

“You can really go to the essence of the storytelling,” affirmed Snoeren.

“When we started working on Flowerbomb we did exactly what we wanted to do,” reminisced Horsting. “It was unapologetically our creation. The fact that it is such a success is amazing, rewarding and fantastic — but it’s also a mystery, in a way.”

At the party, Amos sang songs in honor of the duo including “Flying Dutchman,” “In Your Room,” “Hey Jupiter” and “Happy Birthday.”

Flowerbomb ranks 13th among the world’s feminine fragrances and third in the U.S., said Nathalie Duran, international general manager of designer fragrances at L’Oréal. And that’s while it’s in extremely tight distribution — only 35 percent of  perfumery doors globally.

“Flowerbomb contributes a lot to putting back a bit of magic and a bit of fantasy in fragrances, like it used to be,” Duran asserted. “I think it really corresponds to what people want.”