The entire VS show cast — including Candice Swanepoel, Adriana Lima, Sara Sampaio and Devon Windsor — swung by Tao Downtown post-show on Tuesday night for the after party bash. 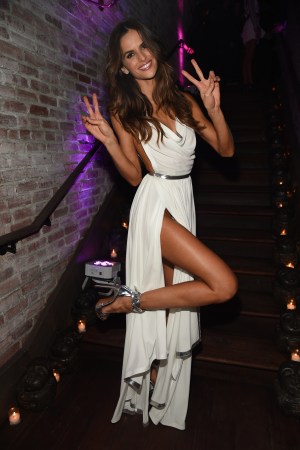 After the blowout fashion show, it’s tradition for the Victoria’s Secret Angels to party like — well, a couple thousand people are watching. Such was the case at Tao Downtown Tuesday night, where Gigi Hadid and Kendall Jenner held court in the middle of the cavernous room. They were glowing, though it was hard to tell if it was from the excitement of walking in their first Victoria’s Secret fashion show, or from the hundreds of tiny iPhone lights that were documenting their every move.

Upstairs, the other VS catwalkers traipsed across a minuscule step and repeat, flaunting their stuff for the cameras. “I’m looking forward to letting it go, getting to be with my girls and dancing all night,” said Constance Jablonski, in Halston. It was a sentiment echoed by most. “Just everything — getting to be with my girls and having fun together,” said Lily Aldridge, who wore the $2 million Fantasy Bra in the show. “It was a dream come true. It felt crazy to get to wear that bra and I took a moment to enjoy it. I got emotional,” she said.

“I’m really ready to celebrate,” said Jacquelyn Jablonski, who ticked off her sixth VS show this year. “It’s so much, a lot of butterflies, a lot of nerves. And you would think the butterflies go away but once you put that outfit on and you’re in that lineup, they come. So it feels good to be with the girls and just let loose and relax.”

As they descended down a staircase (rather angel-like, yes) into the party below, talk turned to the after-after party. “The famous pizza party! Me and the girls always get pizza, so, looking forward to that,” said Jacquelyn. “I don’t know if I can say where [we order the pizza from]. I think I know where it’s from, but I’ll get in trouble.” For some, it didn’t really seem to matter. “I just want carbs,” said Sara Sampaio.