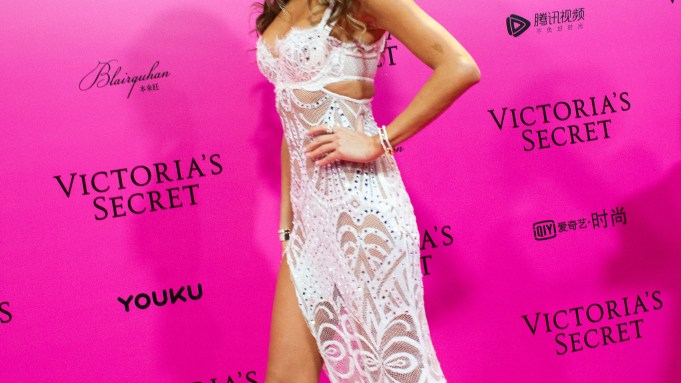 SHANGHAI — Victoria’s Secret’s run of bad luck continues. Its first time showing in China has been beset with problems, and after finally wrapping Monday’s show, its after party came to an early end when authorities ordered it to halt.

After the show taping wrapped just after 9 p.m., the crowd made its way to a neighboring building. Models including Lais Ribeiro, Bella Hadid, Taylor Hill and Grace Bol situated themselves in one section, but the dancing and partying was short-lived. Ten minutes before midnight, the music was cut abruptly, not long after DJ Victor Aime came on to perform.

“They want us to finish. We are sorry, we tried,” said a woman who had been directing the crowd to disperse over the microphone. A number of uniformed police officers had started to make their way in to the venue at the Mercedes-Benz Arena.

The night was memorable although not necessarily for the right reasons. During the show, model Ming Xi took a hard fall on the runway, after seeming to get tangled in a voluminous cape she was wearing. She stayed down for several seconds but eventually got up, helped by a fellow model Gizele Oliveira and cheered on by the audience.

After the show, she took to Weibo, saying “Sorry to disappoint everyone, thank you for everyone’s concern. After modeling for seven years, on this journey I’ve fallen countless times…but I know that no matter how painful the fall, I must always stand up and finish walking. The future road is long and I will keep on going. Thank you all.”

Earlier, a cumbersome check-in process forced hundreds of guests to line up outside braving 9 degree Celsius — 48 Fahrenheit — temperatures for over half an hour before scrambling in the arena in a free-for-all seat situation.