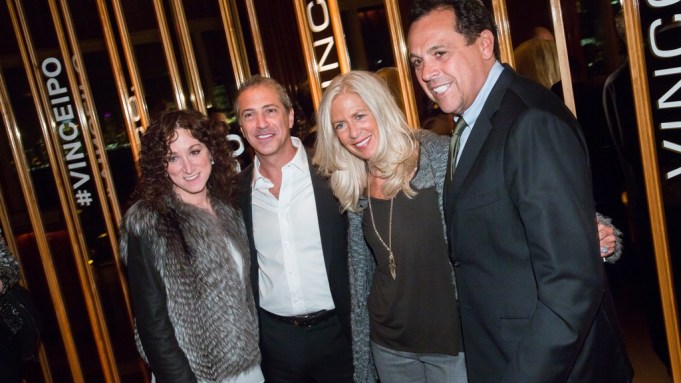 Among the celebrities who attended were Alyssa Milano, Mariska Hargitay, Daisy Fuentes and DJ Chelsea Leyland.

The company, which went public Nov. 22, is trading 15 percent above the IPO price, said Marc Leder, co-chief executive officer of Sun Capital Partners Inc., who cohosted the party with Jill Granoff, ceo of Vince. On the day of the party, the stock closed at $23.18.

“I really don’t look at the stock market price every day. My focus is on the long term — building the brand.

Vince plans to open seven to eight freestanding stores in the U.S. and at least another 20 shop-in-shops globally this year, said Granoff. The company recently opened shops-in-shop in Harrods, Holt Renfrew and Hankyu in Osaka. It also opened a 1,615-square-foot Tokyo store, in the Omotesando district. The company plans to relaunch its Web site this month and is increasing its business with its wholesale partners.

Another opportunity for the brand is expanding product categories such as dresses and outerwear. Vince is rolling out footwear and will launch kids in the fall at select retail doors and its wholesale accounts. Vince is also developing a handbag line in-house that will launch in 2015. Granoff said 8 percent of the business is currently done internationally in 43 countries. “There’s opportunity to double the [international] business over the next few years,” she said.

Vince got kudos from its wholesale accounts, where the vendor is a top-selling contemporary resource.

“Vince is a great partner,” said Tony Spring, the new chairman and ceo of Bloomingdale’s. Jennifer Davis, divisional merchandise manager of contemporary sportswear at Bloomingdale’s, added, “The line is doing really great. We love it going forward, and there’s a lot of opportunity ahead.”

Jennifer de Winter, executive vice president and chief merchandising officer at Saks, said, “Vince is an incredible business for us, a very strong brand and very synergistic with Saks. It’s a big opportunity for both our companies and appeals to a wide customer.” She said Saks carries the women’s and men’s sportswear and shoes “and hopes to carry handbags.”

Liz Rodbell, president of Hudson’s Bay Co. and Lord & Taylor, added, “We love the brand. It’s amazing, and we carry it in Hudson’s Bay. We’re excited about the footwear.”