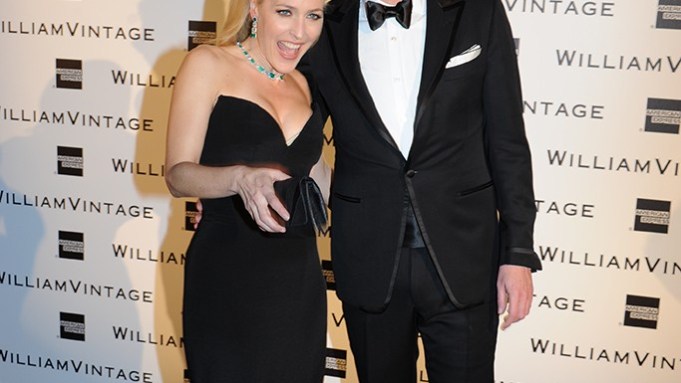 “I love a vintage dress because sometimes — not always, but sometimes — you get a piece and it’s palpably weighted in history,” Gillian Anderson muse at a dinner Friday hosted by Lady Amanda Harlech and William Banks-Blaney to mark a new partnership between William Vintage and American Express at the St Pancras Hotel.

Decked in vintage Azzaro with Adler jewels, Anderson added: “I can remember wearing a vintage Dior couture dress to the Baftas. As I was walking out the door, I was told: ‘You know there’s a bolero to match that was made for Wallis Simpson?’ And I was nominated that night for playing Wallis Simpson. And I didn’t win! But that night I started to appreciate real vintage clothes — as opposed to the stuff I used to think was vintage I wore as a student.”

Irvine said he was off to Budapest to start filming an adaptation of a young adult book by Lauren Kate called “Fallen,” in which vampires are replaced by angels.

Amanda Harlech, who was wearing vintage Halston, was living a bit of her own fantasy at St Pancras.

“[Rainer Maria] Rilke said love is all about leaving, and what better place to choose than where a thousand romantic departures have taken place — a grand Victorian station?” she said, adding that her personal clothing archive is big enough for her to start a vintage agency of her own.