A series of Smith's paintings are on display in the Off-White flagship space in SoHo. 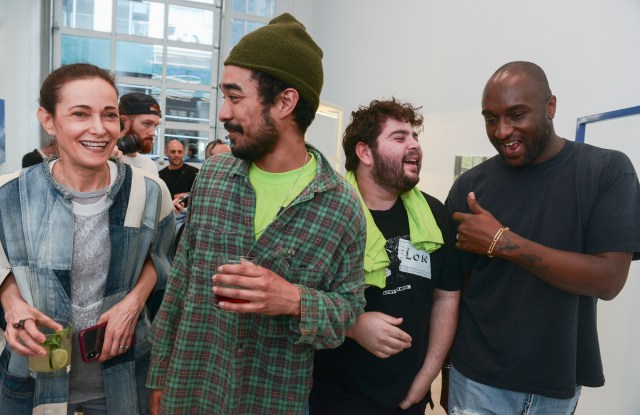 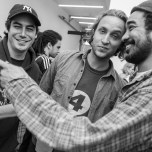 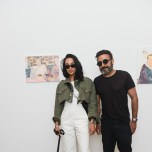 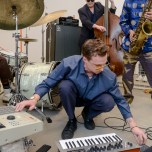 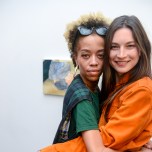 “I went to the optometrist before this. Everything’s a little blurry.”

One of Lucien Smith’s friends arrived at Empty Gallery on Tuesday afternoon donning disposable sunglasses, and it was a fitting display of loyalty for the event. The 29-year-old artist was celebrating the exhibition of his “Friends” portrait series inside the SoHo space, which also moonlights as Virgil Abloh’s Off-White flagship store.

“It all started with the space,” said Smith. “I caught wind of it — I think I misinterpreted what it was, I thought it was actually like a gallery space, and I can see now that it is — but I didn’t know it was really the flagship for Virgil’s thing. So I just shot him a text like, ‘Yo, we should do a show,'” he continued. “He was like, ‘I love it,’ and I started painting from there.”

Smith moved out to Montauk a few years ago, which is where he painted the series from iPhone photos he had taken of his friends. But it’s not all art — there’s also one clothing item on offer: a T-shirt featuring a print from the series of Smith’s ex-girlfriend Marlena. He felt the painting encompassed the emotional impact that the series offered in the way of exploring his interpersonal relationships.

“Lucien and I, we’re part of the same social scene of a generation of New Yorkers that come to the city, and input creativity and cultural brevity,” said Abloh, in between capturing the experimental jazz performance by Onyx Collective in the middle of the space. “They’re part of the new New York fabric that makes the city, why New York is a draw for kids all over the world to come live here.”

Abloh surveyed the packed room, practically transformed as an annex of the downtown creative set’s Lower East Side haunt, the restaurant Lucien.

“Space is valuable in New York. I made this gallery in mind without putting retail at the forefront, but putting a cultural institution that was our own. This is a gallery, super nontraditional, but I rate that importance over the commerce of clothes,” Abloh added. “Me, as a designer, I find it very valuable that I can not only design, but use it as a platform for other people and their creativity.”