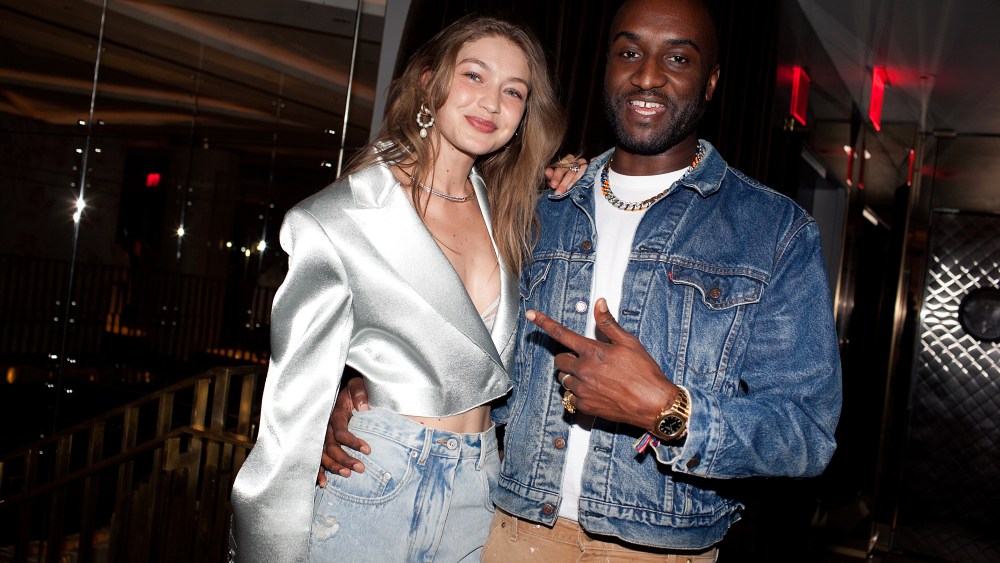 One day — or two, depending when you start counting — after celebrating her birthday at L’Avenue at Saks, Gigi Hadid was back in denim at the restaurant for a different guest of honor. Virgil Abloh was toasting his Off-White Fine Arts exclusive capsule collection and accompanying windows for Saks Fifth Avenue on Wednesday night, and what better way to celebrate than with all his closest friends?

Although Jimmy Fallon was unable to make it to Hadid’s bash, the two have a tradition of eating hamburgers together on “The Tonight Show,” and he was excited to scope out the L’Avenue hamburger selection. “We always try to top each other, who’s getting the better hamburger,” Fallon said. “She’s a pal, she’s a friend of the show, we love her.”

He’s also no stranger to the Saks windows. “I walk past Saks Fifth Avenue everyday of my life, for probably 20 years at most. I work at 30 Rock.” Fallon later toured L’Avenue’s new terrace, opening in a few weeks, and excitedly pointed out his office window across the street.

“I’m interested and I think it’s a dying thing, window art,” he continued, scrolling through photos he’d taken of the Off-White windows. Although Fallon hadn’t yet met Abloh, it was only a matter of time before they entered the friend zone; sure enough, the pair posed for photos minutes later. “I’m familiar with him — brilliant. Love his story,” Fallon added. “I like anybody that they roll the dice on something and they win. Off-White is crushing it.”

The significance of having his brand displayed in prime window real estate wasn’t lost on Abloh.

“The window is a romantic idea of a department store on Fifth and Madison, as the streets of the world,” Abloh said. “I’ve always looked at Off-White, or fashion in this capacity, as a means to communicate and tell a story. So I have an endless pit of inspiration of things that I see and experience for the brand,” he added. “And so with Saks, I love creating a personal narrative of what my brand is and speaking to their following. And the ‘Fine Arts’ and the different disciplines — art, architecture, music, fashion, design — represents the windows that we did at street level, but those truly make up my sources of inspiration, which I pour into the clothing.”

Abloh, who was at Coachella this past weekend, performing a DJ set and stoking the frenzy of sneakerheads with a glimpse of a new Off-White x Nike show, has no shortage of possible moments to be inspired by given his busy schedule, which next month will see the launch of a book and retrospective exhibition at Chicago’s Museum of Contemporary Art, to be followed in June by his third men’s show for Louis Vuitton and his own Off-White men’s show in Paris. “It’s a lot at the same time, but it’s all coming together,” he said.

As for his latest source of inspiration, it’s less event-centric and more, well…

“People, it’s always the people,” Abloh said definitively. “It’s always a conversation that really triggers my mind. I think up silhouettes, I think up runways shows, I think up concept, I think of names of collections — always through situations like this: dinner with friends.”

And there was plenty of inspiration to be found at L’Avenue. During cocktail hour, Selah Marley perched on her boyfriend’s leg, flute in hand; nearby, Cam Newton’s tall hat towered above the crowd while Kerwin Frost and Heron Preston posed for a picture. Luka Sabbat later breezed through the room in a long Off-White jacket, offering hugs to friends and friends-to-be alike, including Olivia Perez and Abloh’s erstwhile trainer Joe Holder. Victor Cruz, in pink tie-dye head-to-toe, talked about the release of his upcoming collaboration with Pierre Hardy, launching May 1, as well as the NFL draft, which started Thursday. “I was hoping my Giants were going to take a quarterback, but now it doesn’t look like it,” Cruz said disappointedly.

Nor did Abloh just stay sequestered in a VIP banquette once everyone sat for dinner. The designer continued making the rounds throughout the evening, stopping by tables for a genuine catch up with even the more low-key people who have been there supporting him since the beginning.

You never know where inspiration will strike.