Helena Christensen, Hilary Rhoda, Richard Chai and Tiësto turned out to toast the magazine’s new edition, which is inspired by indestructible metals. 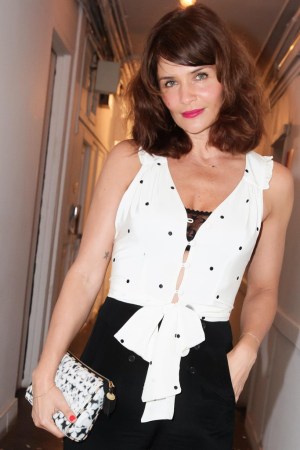 The Clock Tower office building in Lower Manhattan is best known as one of the locations of the New York City Criminal Court. On Saturday night, Visionaire threw a party there for its 63rd edition, which is produced on embossed metal plates instead of paper stock. Admission required hardened fashionistas like Helena Christensen, Hilary Rhoda and Richard Chai to go through a metal detector and put up with casual pat-downs from bemused security guards accustomed to rougher trade. The building’s 19th floor, which has a spiral staircase that leads to the namesake clock and balconies overlooking lower Manhattan flanked by 12 stone eagles, has long been the site of the alternative Clocktower Gallery.

The magazine’s new edition, titled “Forever,” is inspired by indestructible metals. For the party, the gallery’s two floors were wrapped floor to ceiling in silver aluminum foil so that certain rooms looked like very fashionable toaster ovens.

The theme carried over to the clothing as many guests were dressed in silver or sported metallic motifs. Other guests included Leigh Lezark, the model Heidi Mount and Alan Kent, a young man who, with Angel Kent, also in attendance, was once in a Mexican boy band and is now, as these careers tend to evolve, a fashion assistant at Visionaire. The Kents were dressed in midriff- and side-chest-baring golden Jeremy Scott ensembles. On the gallery’s second floor, the superstar DJ Tiësto and his stylist, Christian Stroble, tried to sneak onto the balcony, Champagne flutes in hand, to take in the view but were stopped by a pair of sentinel waiters watching the door. Glasses aren’t allowed outside for liability reasons. “It’s very lame,” said Tiësto, who isn’t told “no” often, especially at dance parties. “Well, you know, it’s a precaution.”

It was a rare sight seeing the Dutch DJ out of his usual booth commanding hordes of dancing ravers. He said he had just relocated to Chelsea after years of living in Stockholm. “I just moved to New York. I’d like to see some different scenes, that’s how I came here,” he said. Reluctant to part with their Champagne, he and Stroble walked downstairs to the dance floor, where a DJ presided over a much smaller crowd than those Tiësto is accustomed to.