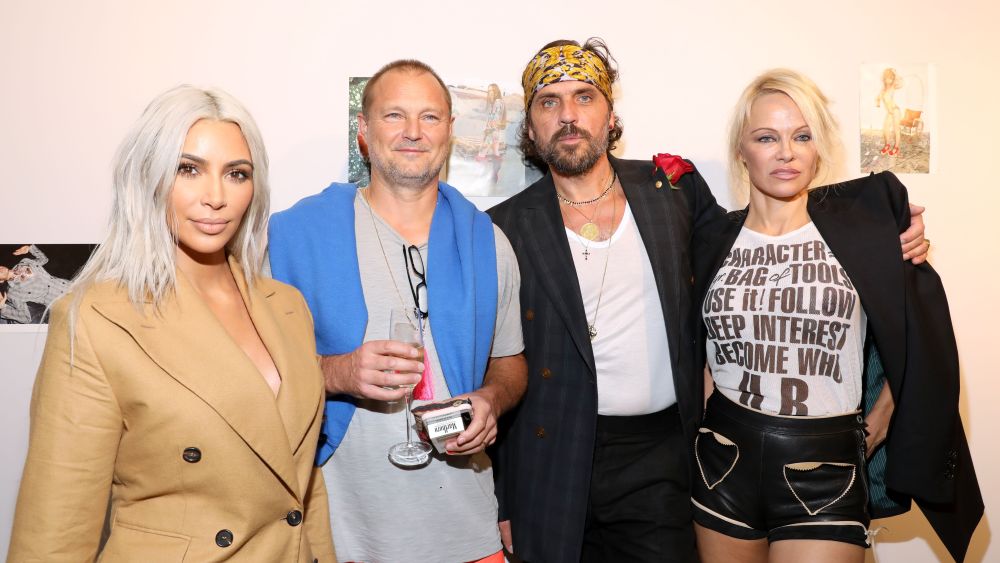 Inside the Vivienne Westwood boutique on 55th Street in New York on Wednesday evening, Dame Vivienne was nowhere to be found (with publicists citing a change in travel plans) and the evening’s cohost, Juergen Teller, not willing to discuss his work (leaving that to a colleague). Which is to say the party’s biggest moment was an early photo opp with drop-by guests Kim Kardashian (who was due at Tom Ford soon after) and Pamela Anderson.

In honor of opening the store in January, Westwood and longtime collaborator Teller threw a party — nine months later — and also set up an exhibition of his photos in the store.

“She can answer,” he replied bluntly to an inquiry about the photographs, routing questions through his studio manager, Rosie, who was more than happy to speak for the photographer sitting only a few feet away.

“The first picture that Juergen shot of Vivienne was in 1993,” the dutiful manager explained. “This is the culmination of all that effort. What Juergen likes most about the exhibition is if you look at the pictures, you can’t really tell when what was shot. Some stuff is ‘97, some is 2005, some is 2017 — you can’t really tell. Normally it would be in proper prints and frames, but the [unframed photographs] more symbolize the way they work.”

“It’s not something new and different, it just felt the right thing to do,” said Westwood’s husband and the brand’s creative director Andreas Kronthaler of the choice to stage the exhibition. “It felt a pleasure to do — it felt natural, and I think that’s what you have to follow.”

The brand’s new Midtown home finds them neighbors with Trump Tower, which Kronthaler said has been “certainly interesting.”

“I wish there could be another…I wanted to say Trump Tower, but another presidential tower, with another name on it. Any name will do, in my opinion,” he said. “But it’s the reality we live in, and we have to somehow deal with it. I’m not sure what to say, but it’s very precarious times. Crazy people are crazy.”

After 9 p.m., the crowd gathered again at Lucien in the East Village for dinner. Sevigny sat immediately with a pantsuited Gates, deep in conversation, while Lyonne and Gevinson schmoozed by the entrance.

“I personally really liked the shots of Vivienne with a sort of white, mime situation, maybe a kimono type of a number, orange hair, black eyebrows — very strong,” Lyonne said of her favorite image from the exhibition. “There was a little series of them, and I was like, ‘Oh yeah, this is why she is an admirable person of high esteem.’ Somebody who is very clear on who she is. No confusion whatsoever. No apology.”

“She’s been a badass for a really long time. And her work with climate change — it’s finding ways to be punk all the time,” Gevinson praised. “I can’t think of an equivalent to her. There aren’t a lot of fashion designers who are that type of personality and have carved out that thing for themselves. She’s peerless.”