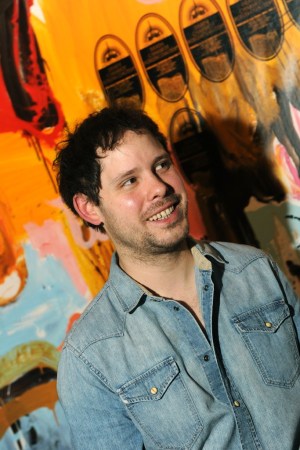 It’s quite difficult to upstage the undeniably chic Roitfeld family, but on Tuesday night it happened, and the culprit was a house.

In conjunction with Armory Arts Week, Vladimir Restoin Roitfeld hosted the opening of “Nicolas Pol: Neverlodge” at 22 East 71st Street in New York City, described via press release as “the historic neo-Italian Renaissance mansion.” The 22,000-square-foot, 45-foot-wide town house is owned by developer Aby Rosen, and is replete with sweeping marble staircase, enormous skylight, multiple marble fireplaces and hand-carved moldings. It is listed for sale with Sotheby’s for about $50 million.

Restoin Roitfeld and Pol filled two of the five floors (not including the additional garden level and subbasement) with Pol’s works: mixed-media sculptures and large-scale paintings. A gigantic black flag hung from the skylight and had to be held aside by those traversing the staircase between the second and third floor. A pumpkinlike papier-mâché head on a stepladder had faux cigarettes stubbed out in its faux eye socket on the fourth.

The bright, graffiti-strewn paintings are heavily influenced by Jean-Michel Basquiat (one is on a piece of a found door), and the sculptures incorporate such objects as taxidermied wildcats, paint-splattered riding helmets, ice skates and even, in the case of the one residing in the fireplace on the ground floor, a recognizable support garment. “That’s a Nu Bra,” one female guest said, pointing at what looked like two oval-shaped slabs of plasticized flesh glued to a plank. “Seriously, I know a Nu Bra when I see it.” An on-site publicist noted that most of the works had already sold or were on hold with an average price of around $50,000.

Caterers passed halved hotdogs and guacamole-topped tortilla chips. On the ground level, there was a large circular table, topped by a trio of tin buckets filled with ice and bottles of Budweiser. Pol had one in hand and absentmindedly picked at the label in a free moment between speaking with collectors.

“The space works, it makes sense, I think,” Pol said of the house. He went on, “I don’t really know why I called it Neverlodge,” he sighed. “It’s a place you can never go, I guess.” To judge by the works, Neverlodge is a sin-filled amusement park on the verge of the apocalypse. “Something like that,” Pol said, and then grinned before Restoin Roitfeld led him off to speak with Rosen, who spent the majority of the evening besieged by real estate admirers.

Ouattara Watts, who showed with Restoin Roitfeld during fashion week, was on hand to check out the opening. “It’s interesting,” Watts said amiably, turning to embrace Restoin Roitfeld. Alexandra Richards wandered through with Nick Cohen. “This is an insane house,” Richards said, gazing up at the carved ceiling of the ground floor. Carine Roitfeld chatted with her pregnant daughter Julia on the second. “I like this sculpture so much,” Julia said of the wood, wool and silk-screen “Red Martus (Naked Girl Falling Down Stairs).” There seemed to be a ball of hair poking through some of the wooden slats. “I have to tell you, I didn’t pay a lot of attention in art history,” Stavros Niarchos said, at the party with girlfriend Jessica Hart. “What a house, though.”