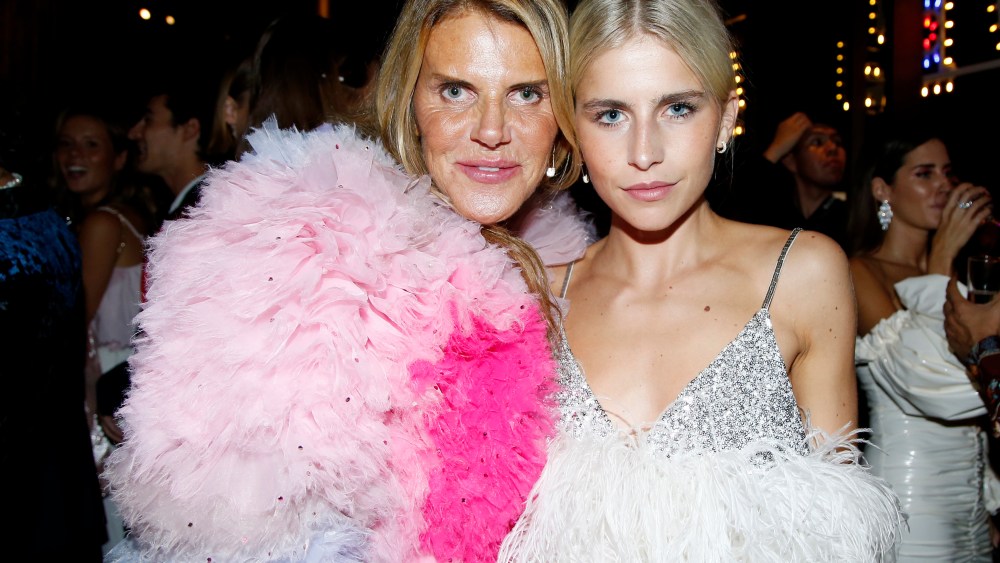 “It’s not my real hair,” confessed Sita Abellan, tugging on her electric blue tresses, minutes before her DJ set for the packed party. “I’m dressed up kawaii tonight.”

The DJ, who is debuting her first line of jewelry this week, blended in perfectly with the exuberantly dressed crowd, who in between snacking on light-up sticks of cotton candy and plates of rainbow-hued sweets lined up to greet Anna Dello Russo, Vogue Japan’s creative director at large.

Actresses Priyanka Chopra and Kat Graham, designers Dean and Dan Caten and Tomo Koizumi, models Irina Shayk and Soo Joo Park all posed for pictures with an excited Dello Russo in front of a set design inspired by the Kawaii Monster Café in Harajuku, Tokyo, featuring a giant pink cat.

“I’ve worked with Anna a lot, she’s always inspirational,” said Park, who was taking the evening off from the Milan shows before walking for Moschino on Thursday. “I love that she loves both doing yoga and street style. She’s just got her own distinct character and she runs with it.”

Gabriele Moratti, creative director of Redemption, was also full of praise for the star of the evening, who swooped in for a hug wearing a fuzzy pink Tomo Koizumi party dress.

“As I’m new to the industry and started as a complete novice, she’s been not only an amazing inspiration but also an amazing guide,” the designer said. “She’s always been straightforward and honest with us from the beginning and has always had the right words. I am forever grateful that I met her.”

Dello Russo was called to the central stage by Jean-Christophe Babin, chief executive officer of Bulgari, who pointed out that the year 2019 also marked the 20th anniversary of the accessories division at Bulgari. Together with Vogue Japan editor in chief Mitsuko Watanabe, the pair congratulated Dello Russo on her 12 years of exuberant fashion stories at the Condé Nast publication, before a giant cake was brought out by three Harajuku girls.

The fashion editor only had one thing to add.

“Enjoy the party guys,” she roared into the microphone to the crowd, who replied with an ecstatic cheer.