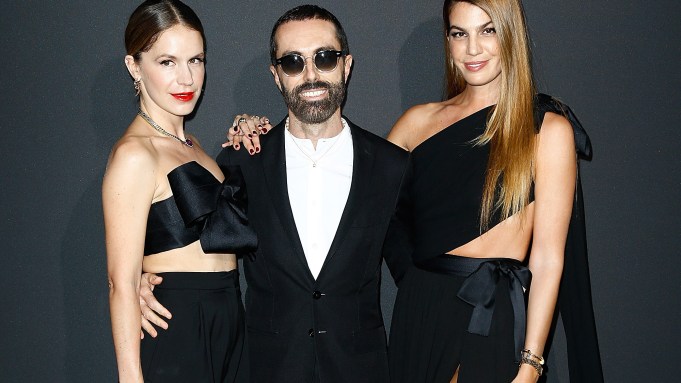 Joining the fashion set for the fifth edition of the Vogue Paris Fashion Fund dinner at the Palais Galliera were figures from the music and film industries, with guests including Pharrell Williams, Lily-Rose Depp, Anthony Vaccarello, Kaia Gerber, Naomi Campbell, Emily Ratajkowski and Simon Porte Jacquemus. The weather was hot, but more spirit-loosening than energy draining, and the mood was playful during the pre-dinner cocktail hour.

Ratajkowski wore a Paco Rabanne top with large, shiny metal links under a suit coat — which she didn’t dare open. “I can’t because I would be naked,” she said ruefully. Relaxing after a work day, she caught up with Jeanne Damas and Jacquemus; the trio headed to a grand staircase that led to a garden, the Eiffel Tower looming ahead.

For a hot second, Casey Spooner reveled in incognito mode, posing under the muscular leg of a marble statue, his Mugler jacket covered in fringes that nearly swept the ground. He had recently shaved his head as part of an experiment about persona, identity and the Internet; gone, too, was the mustache.

But soon he was summoned to greet a group of friends, and he startled one of them, Pedro Winter, with a familiar “Bonsoir, Pedro!” The shaggy-haired French DJ was slow to recognize Spooner, but quick to get the point, having worked all those years with Daft Punk — a pair famous for hiding their faces. The two launched into shop talk, with Spooner outlining plans for a tour of gay bars in smaller U.S. cities to create a “kind of safe place and excitement for the people that are most left out in America,” ahead of the midterm Congressional elections.

Pharrell Williams was less expansive about upcoming projects, revealing only that he’s “just very excited.” That was an ambiguous response, he offered coyly before following it up with “you’ll soon see, but I’m excited,” as he slightly narrowed his eyes.

Also enigmatic, Lou Doillon hinted at something lively for her next album, which she’s just wrapping up. “We are going to be moving a bit — a bit,” she said, flashing a broad smile.

“I have cramps,” read the button on Camille Bidault Waddington’s brown Chloé dress. The stylist said she felt things were getting a bit too serious as she dressed for the event. “I am Kara Walker,” read the other one, “because I like her,” she explained. Stephen Galloway, fresh off the plane from Los Angeles, sidled up and gave her a squeeze.

“How are you, my wife?” he teased, noting regretfully that they don’t talk often enough.

Also in town from L.A. was Elisa Sednaoui, who lives part of the time in London as well. She has been working with her educational foundation in Egypt, and, along with Tania Fares, setting up the board for CFDA Fashion Trust L.A.

“For an Italian Middle Eastern, there’s nothing more relaxing than California and its progressive thinking,” she volunteered.

Adriana Lima, who heads to London next week for a shoot for Love magazine with Katie Grand, was still on a high from the energy of the Miu Miu show.

“Some people were excited — I could hear them,” she recalled, the memory still fresh.