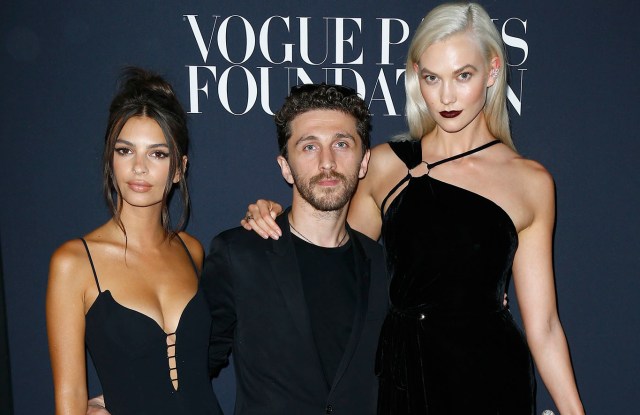 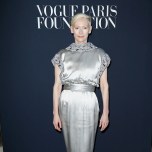 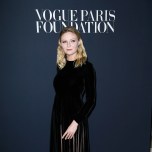 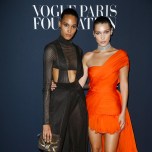 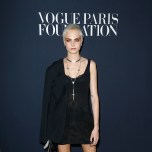 Formula One driver Lewis Hamilton was only a flash in a red as he zoomed in just as guests were sitting down for dinner, followed by Kate Moss.

“Lewis Hamilton is here?” French actress Ana Girardot had asked earlier, looking around for the three-time Formula One champion. She seemed keen to ask him about the sport, as she is about to start filming a biopic on his predecessor, French racing driver Alain Prost.

“Wait, what’s the day today?” Dunst queried, saying she felt a little jet-lagged since arriving in Paris, where she attended Dior and the show of her friends Kate and Laura Mulleavy of Rodarte.

While in Paris, the former Marie-Antoinette wasn’t going for cake. The actress revealed her preference for a very French fare of rosé and a cheese board at La Palette, an iconic café-restaurant which she discovered while filming the historical drama a decade ago.

While “The Beguiled” is still fresh in all minds — it netted its director Sofia Coppola the Best Director prize at the 2017 Cannes Film Festival — Dunst also stars in “Woodshock,” a film written and directed by the Mulleavy sisters that hits theaters Sept. 15, as Theresa, a woman dealing with loss and mind-alteration.

“All I want is a glass of Champagne and to have some fun,” exclaimed Bouchra Jarrar after Olivier Saillard lifted her up in a bear hug. She was enjoying the gentle glide into the holidays, a change of pace from previous years. “[Couture week] is certainly much quieter than when I had my namesake house,” the couturier, now helming Lanvin, said.

Fresh off her ANDAM win in the accessories category and with her haute joaillerie presentation on July 5 at the Ritz, jewelry designer Ana Khouri was not relaxing quite yet. “There is always a pressure because you’re only as good as your last piece,” the Brazilian-born Khouri said, revealing that she’s considering opening a showroom and atelier in Paris. “But I’m rewarding myself by meeting up with my family in Puglia, then heading back to Brazil for a visit. I just want to absorb everything that’s going. A lot of people contacting me, another phase.”

Fresh off adding new designs to his “Cosmogonies Secrètes” collection, he thought there was a particular lightness in the Parisian air this week. “It may be the July couture session, but it would be nice if it were the sign that people’s moods are brightening again.”

“She’s a real, proper fool, but she’s not such a fool that she doesn’t pick Chanel,” Tilda Swinton said of Lucy Mirando, the character she plays in the recently released film “Okja.” Her next feature, “Suspiria,” a “cover version, not a remake,” is coming in 2018.

Saillard, the indisputable man of the hour, was in very high spirits. “It’s a happy moment of change,” he said. Despite having announced his upcoming departure from his position at Galliera, he isn’t planning on calling it completely quits.

Before he hands back the keys to the museum, he is putting on an exhibition on Mariano Fortuny and one on Martin Margiela. “And I don’t really like leaving [things and people behind], so whenever a lover left, I’d say ‘Wait for me, I’ll come with you.’ As long as [the museum] wants me, I’ll keep putting on exhibitions.”

The evening netted more than 600,000 euros in donations from over 20 fashion houses including Chanel, Mugler and Balmain. New exhibition spaces, located in never-seen-before vaulted cellars, are slated to open in late 2019.