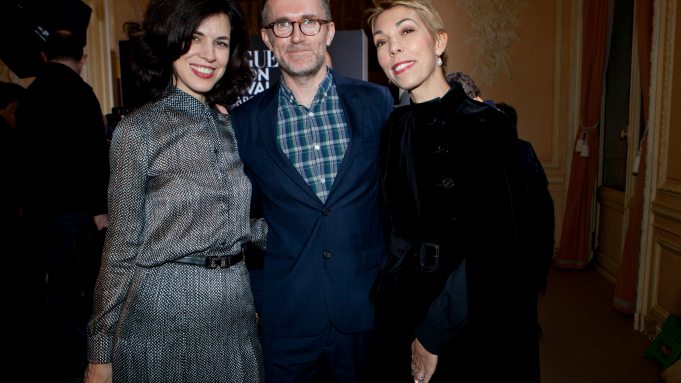 BIRDS OF A FEATHER: It may have been Thanksgiving, but there were no signs of the American tradition at Thursday’s gathering for the Vogue Paris Fashion Festival. Still, one could call it a family reunion of sorts.

“It’s just like home,” exclaimed Jeanne Damas, taking in the dark marble and gilded interior of the 19th-century Hôtel Potocki decorated with Swarovski-encrusted clothing and jewelry.

“But perhaps a bit smaller,” she added, smiling broadly.

Damas was gearing up for her presentation on social networks with Simon Porte Jacquemus at the fashion festival.

The conversation started out with fashion — the large, geometric earring dangling from her left ear was not costume jewelry of unknown origin, as initially suggested, jokingly, but Jacquemus.

“I didn’t force her” to wear the earring, Jacquemus quickly clarified. His tie was bright yellow with thin navy stripes: “Very Eighties!”

Woolmark chief executive officer Stuart Ford, who advises weeding out any Instagram account that gets boring — “I can be quite harsh” — volunteered that Jacquemus has made the cut.

“I like it, it has a different kind of feel to it,” he said, asking about images from Ethiopia recently posted by the French designer.

Longtime friends Vanessa Seward and Mathilde Favier were locked in an animated conversation when Loïc Prigent sidled up.

Prigent had already scrutinized Seward’s gold metal mussel bag earlier in the evening, contorting his body as he waved his phone around her for the best shot.

Noise levels peaked with the arrival of François-Henri Pinault, who politely obliged when prodded to return again, and yet again, for more photos. Guests flocked to catch a word with the Kering chairman and ceo, who recently landed the 23rd spot on the Harvard Business Review’s annual ranking of best-performing ceos, before traipsing off for dinner in the adjacent room.