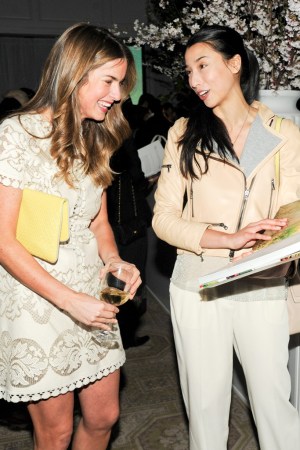 “If you had one image to tell the story of who you are, how would you do it?” asked the writer Lesley M. M. Blume at the launch party for Claiborne Swanson Frank’s new book of portraits “American Beauty,” hosted by Vogue and Tod’s on New York’s Upper East Side.

Swanson Frank, who photographs women from the worlds of fashion, journalism, art, music, philanthropy and technology, said her process involves a mix of intuition and personal style. “I really always have to be inspired,” she added.

As Jessica Stam and Lily Aldridge posed for pictures at one end of the room, Swanson looked on. “I fell in love with Lily,” she said, referring to the model who is draped in an American flag from the 1920s on the cover. “We shot that in Southampton, and the sky was moody. It felt like a portrait that was waiting to be taken. Immediately afterward, it began pouring rain, and I couldn’t drive home for three hours.”

Many of the faces in “American Beauty” (Assouline) are instantly recognizable from the pages of Vogue or the latest party pictures from Patrick McMullan, and like Aldridge, quite a few of them were on hand: Lauren Santo Domingo, Olivia Chantecaille, Alino Cho and the Winklevoss twins. Lauren Bush Lauren proudly put her Feed bag front and center during a quick photo session at the other end.

Alexandra Lind Rose talked about posing in her favorite Oscar de la Renta gown. “I wasn’t wearing any makeup, and she just put my hair in this side ponytail, and then an hour later, she was done,” said Lind Rose. “You typically go through the whole hair and makeup process for photographs but that’s not what she was after. She’s looking for something more real.” Elettra Wiedemann stood on her patio for the photographer. “It was great, but right now, I’m thinking about this weekend. I’m going to Miami to do a triathlon.”

Swanson Frank is about to head in the opposite direction. She’s planning a move to Los Angeles. “I’m ready to begin again, and I’m ready to do something new. I feel passionate about telling the stories of women through portraits.”