By Alessandra Codinha on May 24, 2011
View Slideshow 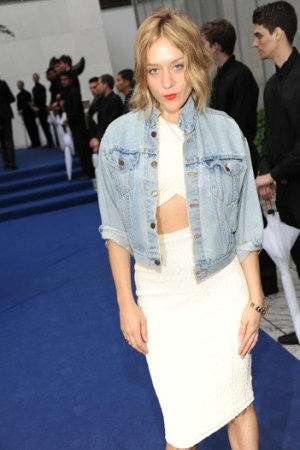 Hahn-Bin, musical prodigy and violinist-extraordinaire was astride the black lacquered grand piano on the second floor of the MoMA on Wednesday night, swaying and trembling with dramatic fervor. Turban-topped with a bright red lip and mascara-laden eyes, the frayed strings from his bow licked at the loosely tied loops of his draped hooded sleeveless top. He paused, smirking at the seated audience who were circled around large, square, lit-from-within dining tables topped with glass-cube encased greenery. The occasion was a celebratory dinner in honor of the new partnership between Volkswagen, MoMA and MoMA PS1, which will support exhibitions and education programs. Earlier in the evening, cocktails were held in the sculpture garden, where a royal blue carpet threaded through the ground floor and around the shallow water-features, filled with pennies dropped by previous guests. James Franco, Kim Cattrall, Cecilia Dean and Penn Badgley arrived, Lucy Liu pulling up in a new Volkswagen vehicle to great fanfare. “This looks like an okay party,” Badgley grinned, casually attired in a worn leather jacket and jeans, popping open a tube of Chapstick, “Not bad at all.” It wasn’t: Yoko Ono and Daphne Guinness were both on hand, the latter picking carefully through the out-of-doors in her signature heel-less platforms, while Cindy Sherman was chatting with Marco Brambilla, Zani Gugelmann and Olivia Chantecaille in the lobby by the bar. As drinks ended and guests like Eric Villency, Helen Lee Schifter, Jennifer Creel and Elise Overland trickled upstairs into the dining area, James Franco slunk over to Patti Smith and Lou Reed’s table for a brief greeting pre-meal. Humberto Leon sat with Chloe Sevigny, a few feet from Rose Byrne and Lissie Trullie. Rachel Weisz listened to the speeches during the first course attentively, applauding enthusiastically at appropriate moments, though many of the guests were less enthused — “I can’t hear what that man is saying,” one laughed of the VW representative’s thick German accent and heavy monotone, “it sounds like a Latin prayer. Is this a Catholic Mass?” It wasn’t.

Madonna, though not particularly inclined to speak with press, was present at the dinner, sitting with Guy Oseary. “This is wonderful, just wonderful,” Weisz smiled, to which Kelly Rutherford agreed, “It’s a very good cause. And everyone likes VW’s, don’t they?” Leelee Sobieski laughed with BryanBoy, Lauren Remington Platt was there to celebrate with her sister Ashley, who had cleverly repurposed a Christian Cota floor-length skirt into a strapless dress, “It’s not a secret,” Ashley laughed, “you can see the safety pin when I turn around.” Remington Platt chatted with Eddie Borgo, whose jewelry she wore on both wrists, while Ann-Dexter Jones warmly embraced Andre J Pejic, whose sequined high-waisted trousers and shock of long platinum blonde hair did not discourage the comparisons he often receives to Karolina Kurkova. Padma Lakshmi turned heads in a formfitting black ensemble, provoking some guests to ask her how she stays so svelte juggling judging a show like ‘Top Chef’ with the recent birth of her child — “Small bites?” she laughed. “Exercise? Having a baby? Chasing that baby around? I don’t know!” During the latter half of the dinner, some guests snuck back out to the sculpture garden (now illuminated, and slowly filling with guests for the afterparty) for palmed cigarettes. Back upstairs, Terence Koh snuggled up to Marina Ambramovic as Martha Wainwright belted out a handful of melodies. LCD soundsystem’s James Murphy, Pat Mahoney and Nancy Whang DJ’ed after the dinner, with guests bopping and shimmying around the art, and the VW insignias, intermittently.

This story first appeared in the May 25, 2011 issue of WWD. Subscribe Today.
You're missing something!
SUBSCRIBE NOW
load comments
blog comments powered by Disqus