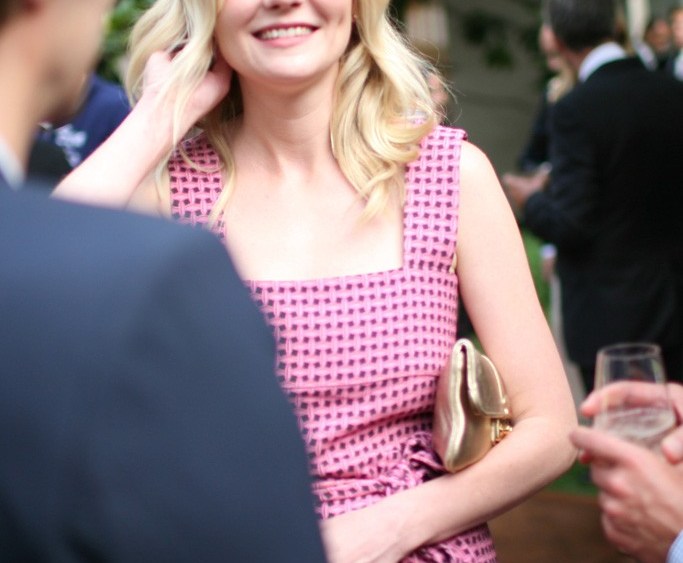 ROCK STARS: Louis Vuitton threw a cocktail and dinner at the Ritz Paris on Tuesday to celebrate the opening of its new jewelry and watch store a couple of doors away on Place Vendôme. Guests viewed the brand’s latest creations in an upstairs suite before repairing to the garden of the hotel, where legendary Hemingway Bar bartender Colin Field dispensed Serendipity cocktails and Ruinart Champagne.

Kirsten Dunst extended a finger to show off her Vuitton ring, made of pink gold set with white and brown diamonds. Her favorite jewels include pieces handed down by her mother and grandmother.

“I’m not wearing it tonight, but I always wear my mom’s ring that she got on her 16th birthday. It’s a bow with a little diamond in the middle — it’s really sweet and pretty,” she said. The actress will go back to work in September, when shooting begins on “The Two Faces of January,” a thriller costarring Viggo Mortensen and Oscar Isaac.

Director Sofia Coppola’s next movie may be called “The Bling Ring,” but her approach to jewelry is decidedly minimalist. “I just wear the things that I have,” she shrugged. “I have a little heart that my dad gave me that I always wear.”

Korean actress Yeong-ae Lee, sporting a stunning diamond necklace from Vuitton’s Les Ardentes collection, said her favorite stones were diamonds and sapphires. Her most precious possession, however, is her wedding ring. “That’s the best for me,” she smiled.

Catherine Deneuve, ensconced on a park bench with Gilles Dufour, puffed on slim cigarettes, her thick mane of blonde hair held back by a diamond-studded Vuitton hair band. The actress is not only extremely knowledgeable about diamonds and jewelry, she said she’s also a fan of all manner of minerals. “I even have a meteorite,” she said. “I bought it in South Africa many years ago.”

Afterwards, guests repaired to the pool room, which had been covered over, the room appointed with mirror-topped tables and crystal chandeliers partially clothed in peach ostrich feathers.

After dinner, frenetic British singer Jamie Cullum took to the grand piano, not only tickling the ivories, but drumming out a beat on the instrument with his fists and fingers.

An offer to take requests — written “on money or underwear,” he specified — was quickly answered with a 10-euro bill scrawled with an obscure ditty Cullum promised to work into a medley. As he wandered among the tables with his microphone crooning “New York, New York,” wacky French television presenter Mademoiselle Agnès doffed a high-heeled shoe and presented it to Cullum, who immediately broke out into a spirited version of “I Get a Kick Out of You.”