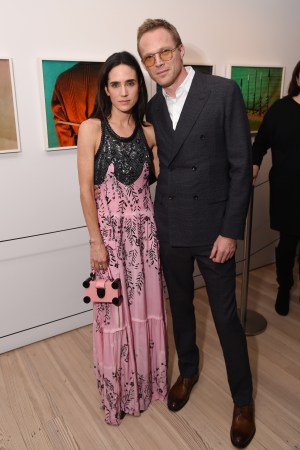 Paul Bettany has a few slashes to add to his profession.

The actor/director/screenwriter was on hand to present his directorial and writing debut “Shelter,” a love story about a homeless couple trying to survive in New York City, at a Wednesday night screening at the Whitney hosted by Louis Vuitton and Coalition for the Homeless. Bettany was inspired to make the film after witnessing the displacement of a local homeless couple after Hurricane Sandy.

“I wanted to make a film that was about judgment and the world I live in, which seems to be a world that is full of increasing gray area,” he explained. “Yet the culture that I live in seems to be increasingly entrenched in black-and-white positions. It ended up becoming about homelessness.”

“It was very collaborative,” said Connelly of her husband’s directing style. “He has a lot of respect for and interest in actors so…he really wanted to hear how we wanted to interpret the scenes.”

Connelly, whose spring 2016 Louis Vuitton overdyed silk crepe embroidered dress brought a bright light to an otherwise serious night, might just get another chance to collaborate with her husband.

“I’m hoping to do it again,” mused Bettany on his behind-the-scenes roles, “if somebody will let me.”

Costar Anthony Mackie added, “We had a really good time shooting this movie, as dark and dreary as it was.”