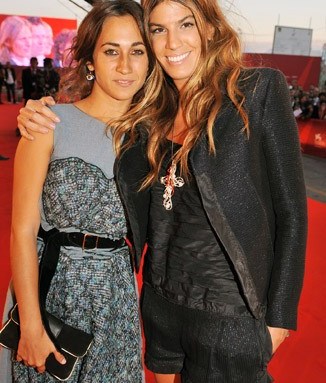 Take the stunning 16th-century Palazzo Contarini Polignac overlooking the Grand Canal in Venice, light up a sea of candles and throw a party with Sofia Coppola as guest of honor. Those elements easily added up to one of the most glamorous events at the Venice Film Festival this past weekend.

“We have numerous friends, but she is special: She is all that we love,” said Antoine Arnault of Louis Vuitton, which threw the bash Friday for Coppola after she premiered her latest movie, “Somewhere,” which will be released in the U.S. on Dec. 22. The film revolves around the relationship — or lack thereof — between a Hollywood star (Stephen Dorff) and his young daughter (Elle Fanning).

“[It’s] branded Coppola,” said Tod’s Diego Della Valle. Naturally, the party drew an eclectic crowd — from actor Willem Dafoe and Naomi Campbell to designers Delfina Delettrez Fendi and Ennio Capasa, who was on crutches, recovering from a stretched muscle, and accompanied by his wife, Dragana. A slew of blue-blooded beauties such as Ortensia Visconti, Bianca Arrivabene Valenti Gonzaga and Bianca Brandolini d’Adda added a titled air.

The hip quotient was also raised by several young actresses and models, including Clémence Poésy, Elisa Sednaoui, Léa Seydoux and Zoe Cassavetes, who hobnobbed in the palace’s expansive wood-beamed rooms.

Dorff, in town with his brother and father, had sightseeing plans, while a wide-eyed Fanning said it was her first time in Venice and described the experience as “fantastic,” singling out “traveling by boat” on the canals as a highlight of her the trip.

Meanwhile, Coppola, accompanied by her partner, Thomas Mars, said it was “a relief” the screening was over. “[It’s] exciting being in Venice and seeing my friends all dressed up,” said the director, whose father Francis Ford Coppola’s family is Italian-American. “Italians are always warm to me. There is a connection.”