No one really knew what to expect as they entered the low-lit Park Avenue Armory on Tuesday evening.

By Pete Born and Amy Wicks on February 15, 2012
View Slideshow 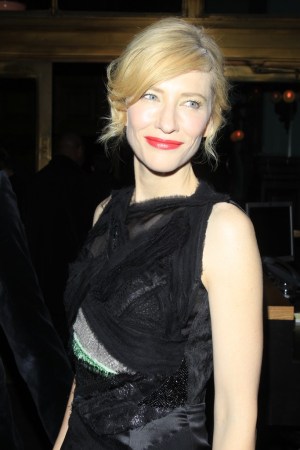 No one really knew what to expect as they entered the low-lit Park Avenue Armory on Tuesday evening. The invitation from W magazine promised “A-list stars” and a massive exhibition of images from fashion photographer Sølve Sundsbø, but the first thing guests noticed was the thick scent of something that sort of resembled sandalwood. The smell intensified when entering into the heart of the armory, leading to 50-foot screens showing Lara Stone and male model David Agbodji morphing into each other through multiple images with animal heads, branches and flowers.

“We could not find screens this large in New York, so we had them brought from Belgium,” said Stefano Tonchi, W’s editor in chief. “Everything is becoming an experience, some form of entertainment. Every fashion show is like a Broadway production now.” He said the point of the film was to show a changing face of beauty.

The imagery, shot by Sundsbø, lasted for 15 minutes and was set on repeat for three hours. The event was particularly heavy on Hollywood A-listers, including Cate Blanchett, Sienna Miller, Evan Rachel Wood, Felicity Jones and Chris Evans, thanks to Global P&G Prestige, a partner in the night’s proceedings that works with the actors on beauty brands such as SK-II, Hugo Boss, Dolce & Gabbana and Gucci.

“This is so overwhelmingly enormous, and the smell is really intense,” said Miller, revealing a burgeoning baby bump. The actress was told the scent, created specifically for the event, was supposed to smell like blood. “Nooo, is that true?” she wondered. “These fashion events can be very intense.”

Around 9 p.m., a smaller group headed to a celebratory dinner at The Mark Restaurant by Jean-Georges. Joanne Crewes, president of Global Prestige, P&G, discussed how the company’s interest in sponsoring the project was to explore “the idea of the transformation of beauty.” Not only a blurring of gender roles, a dissolution of ethnic differences and technological blending as East meets West in a newly globalized world, the show is meant to portray the changing face of beauty, in how consumers portray themselves and what influences they look to.

With her pale skin, Blanchett looked the part of a roving ambassador for P&G’s SK-II high-tech skin care line. When complimented on her youthful looks, she smiled and replied, “I only come out after 8.” Her latest theater project was to appear in “Gross und Klein” (“Big and Small”), a play by Botho Strauss, which her Sydney Theatre Co. is taking on the road to Paris, London and Germany after its opening at home to strong reviews.

Jones, a new face of Dolce & Gabbana, was talking about her latest project, a movie called “The Invisible Woman.” It will be directed by Ralph Fiennes, and Jones will play the previously unknown mistress of Charles Dickens. Filming will start in April.