Temperatures in the 30s didn’t deter stars from turning out to the fete on Friday night. 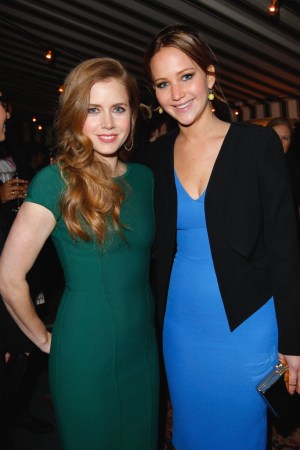 Amy Adams and Darren Le Gallo huddled near a heat lamp as she paged through the “Best Performances” issue to find Philip Seymour Hoffman’s portrait shot by Juergen Teller. “God, I love that man,” she said of her “The Master” costar and fellow (Globes and Oscar) nominee. There was more love nearby, where Kirsten Dunst and Garrett Hedlund stuck close, and Freida Pinto and Dev Patel cuddled inside by the fire.

Bradley Cooper chatted with cohost André Balazs before Chelsea Handler stepped in to smooch her boyfriend. Earlier, she joked about her Heidi-style hairdo. “I told my hairstylist I wanted an around-the-world braid and she said, ‘Those are so last year.’ I said, ‘Well I’m very last year, so let’s do it.’”

RELATED STORY: On the Red Carpet at the Golden Globes >>

Elsewhere, Eddie Redmayne chatted with Mary Elizabeth Winstead. Kerry Washington gamely posted for photos with strangers. Newbies Dreama Walker and Morena Baccarin took in the scene from the relatively calm vantage point of the dining alcove, where nobody was eating. In the middle of the room, standing next to Connie Britton, Katie Aselton praised husband Mark Duplass, who was in “Zero Dark Thirty.” “He held his own against James Gandolfini,” she said proudly. “I mean, who can do that? And I married him.”