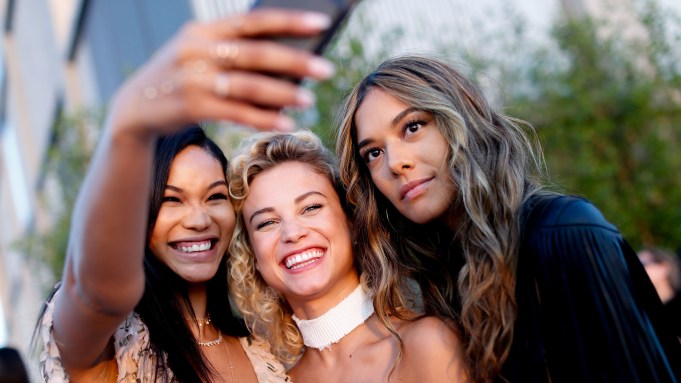 “For me — Lord knows, for every artist struggling in New York — it’s not about the money,” said influencer Tk Wonder, seemingly without irony. “It’s about the love.”

On Thursday evening, W Magazine partnered with AG and took to the newly opened roof of the Public Hotel to advertise its spin-off Instagram account @whoswho, a page dedicated to feeds the magazine thinks readers should follow.

Who to follow appears to be models, as evidenced by the crowd Thursday night of Chanel Iman, Chloe Norgaard, Kate Bock, Malaika Firth and Carmen Carrera, as well as Clara McGregor, Chloe Wise, Sophie Elgort, “Orange Is the New Black” actress Yael Stone, and “13 Reasons Why” actor Tommy Dorfman.

Dorfman said his following grew quite rapidly overnight thanks to the success of “13 Reasons Why,” which he said was his first gig, right out of college.

“Overnight, followers just came through just because of the success of the show,” he said. “And whatever I had on my page when the show came out, viewers responded to. I don’t really subscribe to gender norms. I think it’s really important to express yourself in all the ways. Every day is different. Sometimes I’m wearing a skirt and sometimes I’m dressed like a college bro.”

Model Cipriana Quann and her twin sister, rapper Tk Wonder, said they are quite fond of social media, despite its pitfalls.

“I started the web site Urban Bush Babes specifically for women of color while trying to create content that I thought was missing in the beauty and fashion industry — things that weren’t seen in the mainstream media,” Quann said.

Emerging models such as Natalia Castellar Calvani noted that she wouldn’t have much of a career if not for the app.

“Most of the jobs I book are through social media, and a lot of people give it a bad name because they believe that if someone is known through Instagram, they aren’t worthy of being a model,” she said. “But I think it’s a great tool to have. Technology is taking over, so why not embrace it?”

“Everyone is all about Instagram. You sort of have to stop what you’re doing when you’re at social events to be social,” mused Iman. “I’m on Instagram right now, trying to figure out which picture to post of my girlfriends and me.”